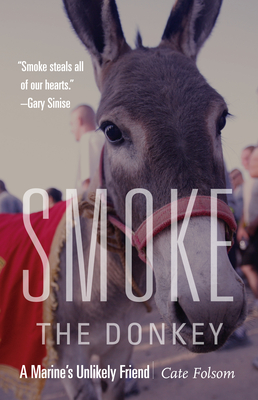 On a U.S. military base near Fallujah in war-torn Iraq, Col. John Folsom woke up one morning to the sound of a small, scruffy donkey tied up outside his quarters. He was charmed by this scrawny animal with a plaintive expression. Folsom and his fellow Marines took in the donkey, built him a corral and shelter, and escorted him on daily walks. One night, hanging out with the Marines as they relaxed after work, the donkey snatched someone’s lit cigarette and gobbled it up, to the laughter of all. Suddenly, the donkey had a name: Smoke. More than a conversation topic for troops connecting with families back home, Smoke served as mascot, ambassador, and battle buddy.

Smoke the Donkey recounts the strong friendship between Colonel Folsom and this stray donkey and the massive challenges of reuniting Smoke with Folsom in the United States following Folsom’s retirement. After being given to a local sheik, Smoke wandered the desert before Folsom rallied an international team to take him on a convoluted journey to his new home. The team won a protracted bureaucratic battle to move Smoke from Iraq to Turkey, only to face a tougher fight getting him out of Turkey. Once in the States, Smoke became a beloved therapy animal for both children and veterans. Smoke’s story, while tinged with sadness, speaks to the enduring bond between a man and an animal, unbroken by war, distance, or red tape.


Praise For Smoke the Donkey: A Marine's Unlikely Friend…

“Smoke the Donkey is a story about two American heroes and their surprising friendship—‘Semper Fidelis’ at its finest. Smoke steals all of our hearts.”—Gary Sinise, actor, humanitarian, and founder of the Gary Sinise Foundation


"A good read for Marines and their families as well as animal lovers."—Kirkus

“Smoke the Donkey is a true American hero. His one-of-a-kind adventure story will leave you laughing, crying, and, most of all, inspired.”—Mark R. Levin, talk radio host of The Mark Levin Show and a New York Times best-selling author


“Warning: You will want a donkey after reading this book! The love for Smoke is palpable, and Cate Folsom captures brilliantly the struggles, perseverance, and harrowing journey to bring Smoke to the States. Smoke is ‘Kick Ass’! A must-read!”—Robin Hutton, author of the New York Times best seller Sgt. Reckless: America’s War Horse

Cate Folsom, the wife of Colonel Folsom, is a longtime editor for the Omaha World-Herald. During her career of more than thirty-five years she has managed beats ranging from city hall to Congress. Her award-winning work includes leading coverage of an attempted mayoral recall and the troubled life of the 2007 Westroads Mall mass killer, as well as embedded reports during National Guard deployments to Afghanistan in 2011.