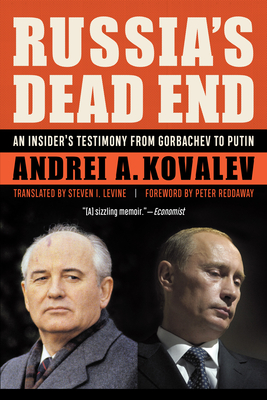 An Insider's Testimony from Gorbachev to Putin

By Andrei A. Kovalev, Steven I. Levine (Translated by), Peter Reddaway (Foreword by)

Elite-level Soviet politics, privileged access to state secrets, knowledge about machinations inside the Kremlin—such is the environment in which Andrei A. Kovalev lived and worked. In this memoir of his time as a diplomat in key capacities and as a member of Mikhail Gorbachev’s staff, Kovalev reveals hard truths about his country as only a perceptive witness can. In Russia’s Dead End, Kovalev shares his intimate knowledge of political activities behind the scenes at the Ministry of Foreign Affairs and the Kremlin before the dissolution of the USSR in December 1991 and afterward, including during the administration of Vladimir Putin.

Kovalev analyzes Soviet efforts to comply with international human-rights obligations, the machinations of the KGB, and the link between corrupt oligarchs and state officials. He documents the fall of the USSR and the post-Soviet explosion of state terrorism and propaganda, and offers a nuanced historical explanation of the roots of Russia’s contemporary crisis under Vladimir Putin. This insider’s memoir provides a penetrating analysis of late-Soviet and post-Soviet Russian politics that is pungent, pointed, witty, and accessible. It assesses the current dangerous status of Russian politics and society while illuminating the path to a more just and democratic future.

Andrei A. Kovalev is a former member of the secretariat of President Mikhail Gorbachev. He worked in the Soviet and Russian Ministry of Foreign Affairs on the staff of the Security Council of the Russian Federation during the Yeltsin and Putin administrations. He is the author of two books on Russian on politics.

Steven I. Levine, a retired professor of politics and history, is the coauthor of Mao: The Real Story.

Praise For Russia's Dead End: An Insider's Testimony from Gorbachev to Putin…

“Mr. Kovalev is a piercing critic of Vladmir Putin’s misrule of Russia. His sizzling memoir . . . is an unsparing account of the Soviet collapse, and of the hardliners’ revenge that followed.”—Economist

“The publication of [Russia’s Dead End] is a notable event. [Andrei Kovalev’s] frank account and unsparing analysis of what he learned from his work at senior levels, from Gorbachev’s perestroika to Putin’s rule, have led him to the conclusion that ‘after getting a taste of freedom, Russia has renounced it of its own free will.’. . . Russia’s Dead End includes a number of pen portraits which ring true . . . and has a good deal to say about the inadequacies of the ruling group, past and present.”—Andrew Wood, International Affairs

"A refreshing report from an insider."—Kirkus
— Kirkus

"Russia's Dead End should be required reading for all American students interested in joining an intelligence service or a foreign-policy agency."—Foreword Reviews
— Foreword Reviews

“Is the West fully aware of the dangers this huge, over-stretched nuclear power presents? How will Russia's leaders act and react in a critical situation which is almost bound to come about sooner or later? Not being an armchair alarmist, Kovalev leaves it to his readers to draw the appropriate conclusions from his narrative. If disaster happens, it will be the West’s fault as well as the Kremlin’s.”—Martin Dewhirst, Salisbury Review

“Andrei Kovalev has drawn on his remarkable career at the highest level of Russian politics from Gorbachev to Putin to give a picture of both successes and disappointments. This is a book written from the heart by a diplomat of acute intelligence. Kovalev rode the steed of Russian public affairs till his conscience told him to dismount, and this exceptional book explains his reasons.”—Robert Service, emeritus professor of Russian history at St. Antony’s College, Oxford University, and senior fellow of the Hoover Institution at Stanford University
— Robert Service

“Andrei Kovalev loves Russia, a different Russia, an open and democratic one, where human rights are respected. His book is a must-read for those who want to understand the most recent history of Russia and who share his love and indignation over how the efforts to democratize his country were ruined by a small yet powerful corrupt clique.”—Robert van Voren, professor of Soviet and post-Soviet studies, Vytautas Magnus University in Kaunas, Lithuania
— Robert van Voren

"Russia's Dead End will make interesting reading for anyone seeking additional insights into that nation and its recent history. . . . A fascinating read."—Robert Fantina, New York Journal of Books
— Robert Fantina