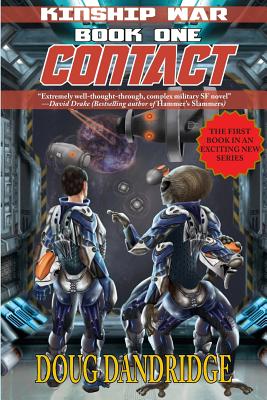 Kinship Wars: Contact is the explosive first book in an exciting new series by Doug Dandridge, author of the popular 'Empires at War' series.

Montana is a newly independent colony, home to both colonizing humans and the Xakalar, who are native to the planet. When deposits of an extremely rare mineral are discovered on the Montana, everyone's eyes focus on the small colony...and everyone wants a piece of the planet.

Matt Chin (a human) and Xelarn (a Xakalar) have grown up like brothers on Montana and are trying to navigate the prejudices and tensions that outsiders are bringing to their colony. But this is the least of their problems.

News from afar reaches the colony that there is a massive alien fleet attacking human colonies across the breadth of space...a fleet that seems to be controlled by aliens who look very much like the Xakalars that share Montana with the humans and who may be the key to either the survival of the human race, or their ultimate destruction.

"Doug Dandridge has penned a real page turner of military science fiction, kicking off what promises to be an epic interstellar saga. He begins with a compelling mystery, and introduces some nice surprises amid a mix of thrilling space battles and intriguing alien-human interaction. Along the way, his inventive takes on galactic travel and star-to-star communications underscore a naval adventure inspired by the finest traditions of Patrick O'Brian and C.S Forester."--Douglas Niles (Bestselling author of Forgotten Realms: The Moonshae Trilogy and War of the Worlds: New Millennium)