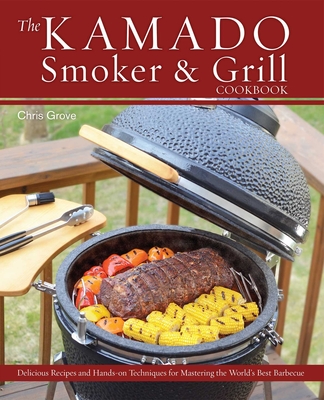 The Kamado Smoker and Grill Cookbook

Recipes and Techniques for the World's Best Barbecue

Organized into 52 tutorials that combine a valuable kamado cooking technique with a delicious recipe, this book takes you from casual griller to kamado master chef with detailed instruction on:

Chris Grove is the resident pitmaster of the popular BBQ and grilling blog Nibble Me This. In addition to his blog, Chris's recipes and photos have appeared in several national media outlets such as Healthy Life Magazine. He has also professionally developed recipes for national brands like Busch Beans. He is a certified BBQ judge and occasional competitive BBQ cook, which has afforded him opportunities to work alongside and learn directly from the best pitmasters, including world champions. However, Chris' real love is creating recipes for the backyard chef. He has spent the past decade experimenting with his cadre of grills & smokers, trying out emerging ingredients & trends, and creating exciting new recipes from the flames.
Loading...
or support indie stores by buying on