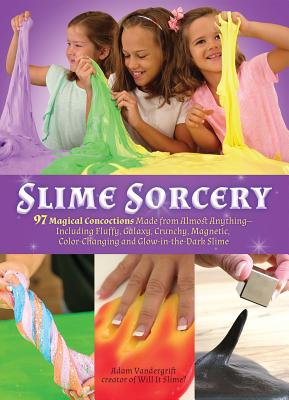 97 Magical Concoctions Made from Almost Anything - Including Fluffy, Galaxy, Crunchy, Magnetic, Color-changing, and Glow-In-The-Dark Slime

THE CRAZIEST AND BIGGEST BOOK OF DIY SLIME RECIPES EVER

With over 100 creative, borax-free slime recipes, Slime Sorcery is packed with color photos and step-by-step instructions for making slime out of anything and everything.

Will it slime? Find out by create every type of slime imaginable, including:

Adam Vandergrift is the creator of the largest slime-dedicated Youtube channel, “Will it Slime?” A father to three adorable daughters, ages four, six, and ten, Adam’s journey with slime began one creative afternoon at home and is a fun project they enjoy as a family. More about “Will It Slime?” can be found on YouTube, Instagram (@willitislime), Facebook, and www.willitslime.com.
Loading...
or support indie stores by buying on