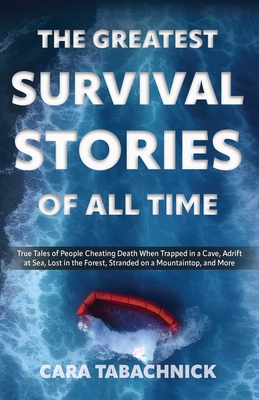 The Greatest Survival Stories of All Time (Paperback)

True Tales of People Cheating Death When Trapped in a Cave, Adrift at Sea, Lost in the Forest, Stranded on a Mountaintop and More

Discover the harrowing, true tales of those who have faced certain death...and survived!

The stories seem too unbelievable to be true. Lost individuals facing the most severe natural disasters, the most dangerous situations, and the most inhospitable conditions...and coming back alive. From plane crashes and sinking ships to surviving in freezing forests and dry deserts, this anthology of survival stories includes some of the most famous, unbelievable tales of beating the odds.

This book features gripping tales of sheer bravery and quick thinking, including:


Whether you want to be thrilled by close calls and narrow escapes, or get inspired by some of the greatest stories of human endurance, this collection of tales has something for everyone.

Cara Tabachnick is a journalist who writes and reports and writing about global criminal justice systems, focusing on police, prisons and drugs. She has written for publications such as Marie Claire, "O" Oprah Magazine, The Washington Post Magazine, The Wall Street Journal, The Christian Science Monitor, The Guardian, and Scientific American. She has written a true-crime series for Harper Collins UK based on FBI Most Wanted Cases.

From 2008-2015 she was the Deputy Director of the Center on Media, Crime and Justice at John Jay College of Criminal Justice in New York City. While there, she also served as the Managing Editor of its daily news service, The Crime Report.

She is a graduate of Columbia University’s School of Journalism and splits her time between Brooklyn and Spain. This is her first foray into writing about survivor stories.
or
Not Currently Available for Direct Purchase
Copyright © 2020 American Booksellers Association