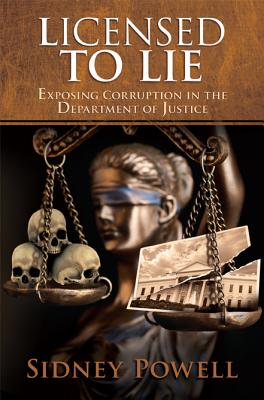 Exposing Corruption in the Department of Justice

A tragic suicide, a likely murder, wrongful imprisonment, and gripping courtroom scenes draw readers into this compelling story giving them a frightening perspective on justice corrupted and who should be accountable when evidence is withheld. Licensed to Lie: Exposing Corruption in the Department of Justice is the true story of the strong-arm, illegal, and unethical tactics used by headline-grabbing federal prosecutors in their narcissistic pursuit of power. Its scope reaches from the US Department of Justice to the US Senate, the FBI, and the White House. This true story is a scathing attack on corrupt prosecutors, the judges who turned a blind eye to these injustices, and the president who has promoted them to powerful political positions.

Praise For Licensed to Lie: Exposing Corruption in the Department of Justice…

“When you’ve finished reading this fast-paced thriller, you will want to stand up and applaud Powell’s courage in daring to shine light into the darkest recesses of America’s justice system. The only ax Powell grinds here is Truth.”


“Licensed to Lie reads like a cross between investigative journalism and courtroom drama. The takeaway is that both Bushies and Obamaites should be very afraid: over the last few years, a coterie of vicious and unethical prosecutors who are unfit to practice law has been harbored within and enabled by the now ironically named Department of Justice.”