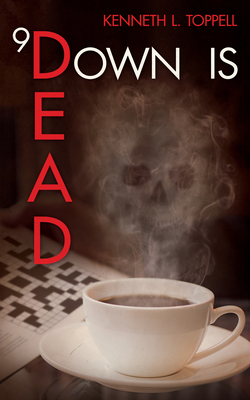 Henry and Carolyn Atkinson and Shelley and Marian Gar on reunite in 9 Down Is Dead in a quest to stop a murderous, crossword-loving, power-hungry businessman. Global Development Technologies appoints Nolan Herbert as acting CEO after the company's founder and CEO Brad Groes goes missing. Herbert holds the position for two years, leaving a trail of once-inquisitive bodies in his wake. When the fourth death occurs, Henry can't help but get involved, his cousin Shelley close behind him. Meanwhile, Groes's only living relative inherits his fortune, falls in love with a white-collar crime lawyer, and ends up in the public eye. Who will be Herbert's next victim? Can anyone stop his murderous rampage?

Kenneth L. Toppell wanted to write when he went to the University of North Carolina, Chapel Hill. He was there during a tumultuous time, the start of the sit-in campaigns and the onset of the civil rights movement. He graduated with a degree in history and political science before he went on to Emory University School of Medicine in Atlanta, Georgia, and postgraduate training in Houston, Texas, and in the army. Over the next forty-eight years, Ken did his writing on patient charts in medical wards and intensive care units. It was a time when organ transplants, which were rare and only performed by celebrity doctors, became techniques which are now part of surgical training. Passionate physicians implemented new forms of medical research and brought HIV/AIDS from an epidemic with a 100 percent mortality rate to an outpatient disease. There were new tools and new drugs reinforcing why medicine is called practice. As the years passed by, Ken began to give lectures in American History, and he had some time to practice a new kind of writing. He now lives in Plano, Texas, where he reads, writes, and enjoys life with his wife of fifty-four years.
Loading...
or support indie stores by buying on