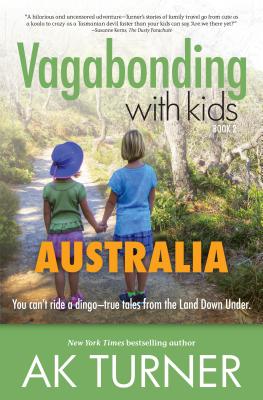 Australia: You Can't Ride a Dingo - True Tales from the Land Down Under

AK Turner wants to cuddle with a wombat. She wants it bad. In the hilarious sequel to Vagabonding with Kids, the nomadic family of four continues their journey with a two-month trip Down Under. AK Turner indulges her fascination with prisons, with no understanding of why her husband would rather spend every day at the beach. Their daughters aren't motivated by either, and are instead enthralled with the wonders of public toilets. As the Turners wind their way through Australia, all eyes are on the lookout for adventure. And wombats. New York Times bestselling author AK Turner continues the Vagabonding with Kids series with tales of exploring Down Under in Vagabonding with Kids: Australia. With a keen eye and sharp wit, Turner juxtaposes the intrigue of Australia with stories from an unconventional life on the road. This raucous adventure will inspire digital nomads and armchair travelers alike, and leave readers hungry for the next installment in the series, Vagabonding with Kids: Brazil.

AK Turner is the New York Times bestselling author of This Little Piggy Went to the Liquor Store, Mommy Had a Little Flask, and Hair of the Corn Dog. Her works have received a starred review from Publishers Weekly, an IPPY Award for Humor, and been named in BookLife's Top 5 Indie Books of 2014. She is a contributor to the anthologies Leave the Lipstick, Take the Iguana (Traveler's Tales), Little White Dress (Mill Park Publishing), and I Just Want to Be Alone (Throat_Punch Books). Her work has been featured online at Scary Mommy, In the Powder Room, The Huffington Post, Nickmom, Felicity Huffman's What the Flicka?, and Artocratic, among others, and in a variety of print publications. She is a former humor columnist, founded "The Writers' Block" on Radio Boise, hosted the "Tales of Imperfection" podcast, serves on the board of the Idaho Writers Guild, and speaks at conferences and in live comedy events. A former Writer-in-Residence for the City of Boise, she lives in Idaho with her husband and two children, but travels frequently as a part-time digital nomad. Her next series focuses on parenting humor and travel.
Loading...
or
Not Currently Available for Direct Purchase