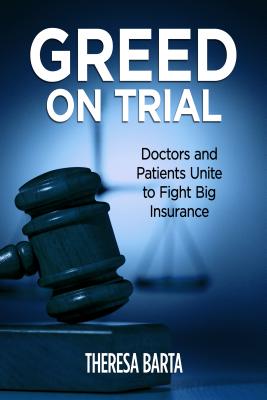 In today's medical landscape, insurance companies call the shots. In order to make a profit, insurers and health-care corporations often enact policies that require cutting corners on patient care. They ask doctors to double- and triple-book appointments and reduce the amount of time spent with each patient. They pressure doctors to prescribe older, cheaper medications and to limit the number of tests and referrals they order. Often, they threaten doctors that if they do not comply with the new policies, they'll lose their jobs or insurance affiliations. Despite these threats, in striving to provide excellent medical treatment, good doctors resist these new policies. And in turn, they can find themselves terminated. That's where Theresa Barta steps in. A highly successful trial attorney, Barta specializes in a very particular type of law: suing insurers and health-care companies who terminate doctors illegally and unethically. Greed on Trial brings Barta's work to life, following three actual cases from her files. In each case sits a doctor who was wrongfully terminated after rebelling against insurance policies in order to provide premium care to a patient. And in each story, we watch Theresa assemble her evidence, plan a strategy, and take the case to trial. Greed on Trial is an eye-opening book about an issue that affects everyone: insurance company abuses. Once you read it, you will never look at health care the same way again.

Theresa Barta is a physician’s advocate. She started her law practice in 1998 and has since represented hundreds of physicians in litigation matters against insurance companies, medical groups, and HMOs. She tried one of the first cases in California under the state’s anti-retaliation statute and has won many multimillion-dollar verdicts and settlements for her clients. In 2013, she was named Top Gun Trial Lawyer of the Year. Ms. Barta began her career with the law firm of Morrison & Foerster, where she specialized in business litigation, and from there went on to work for Shernoff Bidart Echeverria, where she litigated cases in the firm’s health-insurance practice—in particular, bad-faith disputes against health insurers and HMOs. She is admitted to practice in the United States Supreme Court, US Courts of Appeal for the Ninth and Eleventh Circuits, and all of the state and federal courts in California. She holds a JD from Loyola Law School, where she graduated Order of the Coif and was a member of the St. Thomas More Law Honor Society. Ms. Barta lives in Newport Beach, California, with her husband and has two daughters.