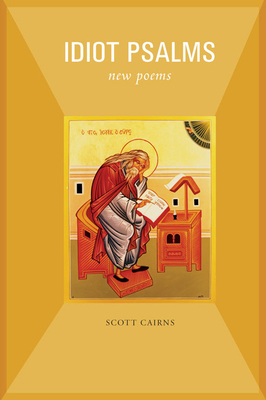 A new collection from one of our favorite poets. Fourteen “Idiot Psalms,” surrounded by dozens of other poems, make this his most challenging collection yet.

“Idiot Psalm 1”
O God Belovéd if obliquely so,
dimly apprehended in the midst
of this, the fraught obscuring fog
of my insufficiently capacious ken,
Ostensible Lover of our kind—while
apparently aloof—allow
that I might glimpse once more
Your shadow in the land, avail
for me, a second time, the sense
of dire Presence in the pulsing
hollow near the heart.
Once more, O Lord, from Your Enormity incline
your Face to shine upon Your servant, shy
of immolation, if You will.

“The bulk of the collection is drenched with the so-called apophatic spirituality that is so central to Orthodox theology. That is, God is unknowable, and any language we use to describe God is centered more around what God is not than what God is. There are threads of this apophatic spirituality throughout. His poems wind their way through a desire to know or see God, only to have God appear, but not as anything concrete or tangible. No solid rock or eagle's wings here; God is a shimmering fog, at most...But ultimately it was more satisfying to pursue Cairns's words the way he pursues the Holy One, the Inexhaustible, the ‘Forever Forgiving Forgone (sans conclusion)’ - with openness and curiosity, willing to receive whatever encounter with the Holy might result.” —MaryAnn McKibben Dana, Englewood Review of Books

“Scott Cairn’s new book of poetry takes off with ‘High Plane,’ an almost sonnet, almost blank verse poem whose musicality makes melodious revisions in the tentative descriptions of flight, life, and the divide between knowing and remaining open to the unknown. The poem and its placement before the beginning of the IV sections give us a preface and a hint of the poetic questionings yet to come...As we near the end of the book, the poem ‘Draw Near’ concludes with this admission: ‘I have no sense of what this means to you, so little/ sense of what to make of it myself, save one lit glimpse/ of how we live and move, a more expansive sense in Whom.’ That ‘Whom’ clarifies with the ‘Annunciation’ where ‘we all become/ the kindled kindred of a king whose birth/ thereafter bears to all a bright nativity.’ In that light of Christ, referred to as the ‘Holy One,’ the final poem in this highly recommended book asks that we might come to ‘the cup, before the coal/ is set upon our trembling tongues, before/ we blithely turn and walk again into our many other failures’ and somehow ‘apprehend something of the fear/ with which we should attend this sacrifice,/ for which we shall not ever be found worthy,/ for which – I gather – we shall never be prepared.’” —The Poetry Editor, Poetry

“Scott Cairns, professor at the University of Missouri in Columbia, is one of the leading American poets of faith. The title of his new book, ‘Idiot Psalms,’ shows his ability to combine biblical study with humility. Fourteen invented psalms, spread throughout the book, have a grieving narrator, the ‘Idiot,’ who regrets his imperfections. He recognizes the ‘fraught obscuring fog / of my insufficiently capacious ken.’ The first of this sequence shows a ‘servant’ who seeks spiritual connection with his God. After self-examination, he turns to faith...Cairns creates his own poetics to pursue the difficult goal of writing about the Bible without being preachy. He uses Greek, both modern and New Testament vernacular, phrases to amplify his religious motifs. Indeed, the poet sets some poems in Greece, which creates an immediacy for the entire collection. The confessional writings of St. Augustine are a model for the poet, even if indirectly. Cairns renews Augustine’s genre to present contemporary spiritual struggles.” —The Kansas City Star

Librettist, essayist, translator, and author of nine poetry collections, Scott Cairns is Professor of English and Director of the Low-Residency MFA Program at Seattle Pacific University. His poems and essays have appeared in Poetry, Image, Paris Review, The Atlantic Monthly, The New Republic, and both have been anthologized in multiple editions of Best American Spiritual Writing. He received a Guggenheim Fellowship in 2006, and the Denise Levertov Award in 2014.
Loading...
or support indie stores by buying on