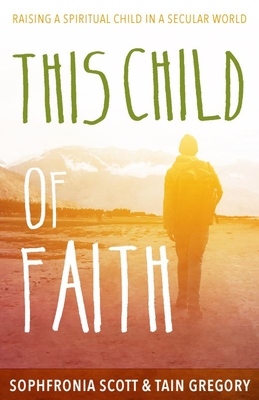 This Child of Faith

Raising a Spiritual Child in a Secular World

A gift of hope and encouragement to all parents and their children, in the wake of the Sandy Hook tragedy.

In This Child of Faith, mother and son writing team Sophfronia Scott and Tain Gregory share stories, experiences and ideas to help parents get to the heart of the question: How do you help a child have faith—real faith that they own—in the challenging world we live in today?

Tain Gregory was present in his third grade classroom on the morning of December 14, 2012, the date of the Sandy Hook shootings. As part of the healing process for the community after the tragedy Tain was asked “What’s the most important thing in the world to you?”

His mother expected an answer about a video game or Pokemon trading card. Tain thinks for a moment then answers with one word. “God.” Until that moment, Tain’s mother had no idea how close to the surface Tain’s faith existed for him.

This is a fascinating look at the journey of three souls, Tain’s and his parents’, that began with Tain enrolling in Sunday School and led to a strong life of faith for all of them.

Praise For This Child of Faith: Raising a Spiritual Child in a Secular World…

"Frankly, this is one of the best books about faith formation I’ve read." —Elizabeth Palmer, Christian Century

Sophfronia Scott grew up in Lorain, Ohio, a hometown she shares with author Toni Morrison. She holds a BA in English from Harvard and an MFA in writing from Vermont College of Fine Arts. She began her career as an award-winning magazine journalist for Time, where she co-authored the groundbreaking cover story “Twentysomething,” the first study identifying the demographic group known as Generation X, and People. When her first novel, All I Need to Get By, was published by St. Martin’s Press in 2004 Sophfronia was nominated for best new author at the African American Literary Awards and hailed by Professor Henry Louis Gates, Jr. as “potentially one of the best writers of her generation.”

Her latest book is The Seeker and the Monk: Everyday Conversations with Thomas Merton. Sophfronia’s other books include Unforgivable Love, Love’s Long Line, Doing Business By the Book, and This Child of Faith: Raising a Spiritual Child in a Secular World, co-written with her son Tain. Her essays, short stories, and articles have appeared in numerous publications including Yankee Magazine, The Christian Century, North American Review, NewYorkTimes.com, and O, The Oprah Magazine. Her essays “Hope On Any Given Day,” “The Legs On Which I Move,” and “Why I Didn’t Go to the Firehouse” are listed among the Notables in the Best American Essays series.

Sophfronia is the recipient of a 2020 Artist Fellowship Grant from the Connecticut Office of the Arts. She has taught at Regis University’s Mile High MFA and Bay Path University’s MFA in Creative Nonfiction. She’s also delivered craft talks and held workshops at the Yale Writers’ Workshop, Meacham Writers’ Workshop, and the Hobart Festival of Women Writers. Currently Sophfronia is the founding director of Alma College’s MFA in Creative Writing, a low-residency graduate program based in Alma, Michigan. She lives in Sandy Hook, Connecticut where she continues to fight a losing battle against the weeds in her flower beds.

Tain Gregory is in the eighth grade at Newtown Middle School. He enjoys riding his bike, playing video games with his friends, acting in musicals, and playing piano. He sings at church and serves as a junior acolyte. He’s also a Boy Scout in Newtown’s Troop 770 and appeared in the Sandy Hook documentary that became Midsummer in Newtown, from Participant, the company that produced the Oscar-winning Spotlight.
Loading...
or
Not Currently Available for Direct Purchase