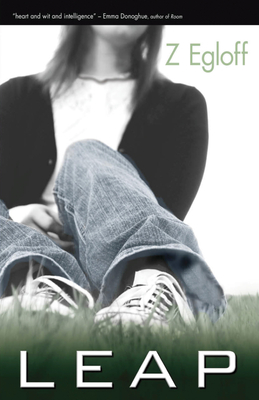 "a heartfelt coming-of-age story worth a read . . . Rowan grows and learns more in one summer than a lot of us do in years, which is what made "Leap" an enjoyable read" --"Liberty Press," June 2013

Summer 1979. Rowan Marks is done with high school. Next comes college. But in between there's a yawning gulf--the last carefree summer vacation.

Rowan's older brother Ben is smoking too much dope. Her best friend Danny is in love with her. And Catherine, the new girl in their small Ohio town, rubs her the wrong way. But that's OK. Rowan can deal with it.

Just when she thinks she's got it all worked out, everything turns on its head. Catherine steals her heart, Danny falls out with her, and when Ben crashes the family car, the family secrets come tumbling out.

All of a sudden, Rowan has a stark choice--is she going to grow up or give up?

Z Egloff is an exciting new talent. "Leap" is an accomplished follow-up to her first novel, "Verge," which won the Bywater Prize for Fiction and was a finalist for a Lambda Literary Award.

""Verge" has heart and wit and intelligence."--Emma Donoghue, author of "Room"

""Verge" is powerful, quirky, and fresh. . . . Z Egloff creates a rich, inclusive world and a heroine who's one of the most endearingly fallible characters I've met in a long time."--Alison Bechdel, author of "Fun Home"

"With "Verge," Z Egloff enters the ring of fiction with the assurance of an old hand. . . . This is a talented writer."--Carol Anshaw, author of "Aquamarine"

Z Egloff was born in California, raised in the Midwest, and schooled (academically and otherwise) in Amherst, Massachusetts, and on Cape Cod. Her first novel, "Verge," won the Bywater Prize for Fiction and was a finalist for the Lambda Literary Award for Debut Fiction.
Loading...
or support indie stores by buying on