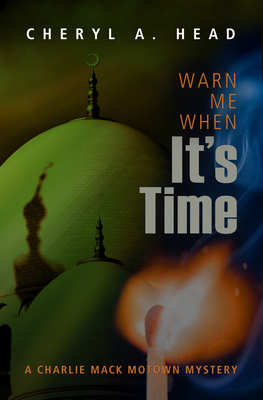 Warn Me When It's Time (Charlie Mack Motown Mystery #6)

A hate group operating in Oakland County, Michigan has claimed responsibility for a six-month-long string of arson fires and robberies at mosques, temples, and black churches around Detroit, eluding police and federal agencies. The most recent fire, at a mosque in Dearborn, kills a respected imam. His children--suspicious of law enforcement's treatment of Muslims and afraid of reprisal--hire Charlie Mack and her team of investigators to find their father's murderers. The Mack team begins to hunt down the clues in this local hate crime, but they aren't prepared when they realize that those clues are pointing to a widespread conspiracy that runs through elected state officials and up to the highest levels of national leadership. FBI agent, James Saleh, returns to help the Mack Agency infiltrate and take down a homegrown militia hell-bent on starting a race war in America.

Warn Me When It's Time is a finalist for the 2022 Anthony Award Nominee for Best Paperback Original/E-Book/Audiobook Original Novel and was awarded an Independent Publishers (IPPY) Silver Medal for Great Lakes Regional Fiction.

A Detroit native, CHERYL A. HEAD now lives on Capitol Hill in Washington, DC. Her novels Long Way Home: A World War II Nov and Catch Me When I'm Falling were Next Generation Indie Book Award finalists. Bury Me When I'm Dead was a 2017 Lambda Literary Award finalist and included in the Detroit Public Library's African American Booklist. Her novel Judge Me When I'm was the recipient of the Ann Bannon Award from the Golden Crown Literary Society. In 2019, Head was inducted into the Saints & Sinners Literary Hall of Fame. She also serves on the board of directors of Bouchercon.
Loading...
or support indie stores by buying on