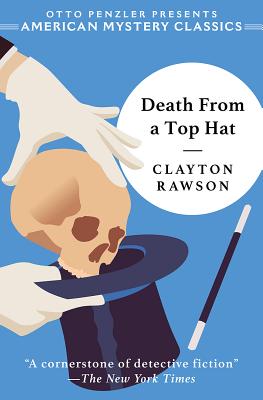 Death from a Top Hat (A Great Merlini Mystery)

A detective steeped in the art of magic solves the mystifying murder of two occultists.

Now retired from the tour circuit on which he made his name, master magician The Great Merlini spends his days running a magic shop in New York’s Times Square and his nights moonlighting as a consultant for the NYPD. The cops call him when faced with crimes so impossible that they can only be comprehended by a magician’s mind. In the most recent case, two occultists are discovered dead in locked rooms, one spread out on a pentagram, both appearing to have been murdered under similar circumstances. The list of suspects includes an escape artist, a professional medium, and a ventriloquist, so it’s clear that the crimes took place in a realm that Merlini knows well. But in the end it will take his logical skills, and not his magical ones, to apprehend the killer.

Reprinted for the first time in over twenty years, Death from a Top Hat is an ingeniously-plotted puzzle set in the world of New York stage magic, which was at its pinnacle in the early twentieth century. In 1981, the novel was selected as one of the top ten locked room mysteries of all time by a panel of mystery-world luminaries that included Julian Symons, Edward D. Hoch, Ellery Queen’s co-creator Frederic Dannay, and Otto Penzler.


Praise For Death from a Top Hat (A Great Merlini Mystery)…

Clayton Rawson (1906–1971) was a novelist, editor, and magician. He is best known for creating the Great Merlini, an illusionist and amateur sleuth introduced in Death from a Top Hat (1938). Rawson followed the character through three more novels, concluding the series with No Coffin for the Corpse (1942). In 1941 and 1943 he published the short-story collections Death out of Thin Air and Death from Nowhere, starring Don Diavolo, an escape artist introduced in the Merlini series.