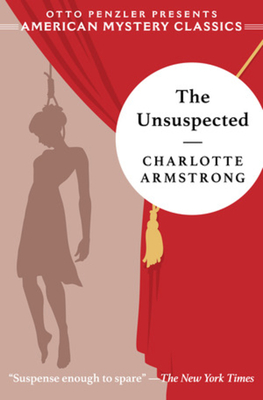 The note discovered beside Rosaleen Wright’s hanged body is full of reasons justifying her suicide—but it lacks her trademark vitality and wit, and, most importantly, her signature. So the note alone is far from enough to convince her best friend Jane that Rosaleen was her own murderer, even if the police quickly accept the possibility as fact. Instead, Jane suspects Rosaleen’s boss, New York theater impresario Luther Grandison. To the world at large, he’s powerful and charismatic, but Rosaleen’s letters to Jane described a duplicitous, greedy man who would no doubt kill to protect his secrets. If Rosaleen stumbled upon one such secret, it could have led to an untimely demise—and Jane risks a similar end when she takes a job with Grandison’s company, tangling with one of Broadway’s deadliest actors in a desperate play for the truth.

A playwright before she turned to crime fiction, Charlotte Armstrong drew from her experience in the theater for her fourth novel, The Unsuspected. The book inspired the 1947 film of the same name.


Praise For The Unsuspected…

Armstrong’s streamlined and evocative writing style makes this a fantastic

Charlotte Armstrong (1905-1969) was an Edgar Award-winning American author of mystery short stories and novels. Born and raised in the mining region of Michigan’s Upper Peninsula, she moved to New York and received a B.A. degree from Barnard in 1925. She had two plays produced on Broadway but neither was successful, so she turned to writing mystery fiction, beginning with Lay On, MacDuff (1942), the first of three detective novels featuring Professor MacDougal Duff. Several of her novels were adapted for film, including The Unsuspected, The Chocolate Cobweb, and Mischief.