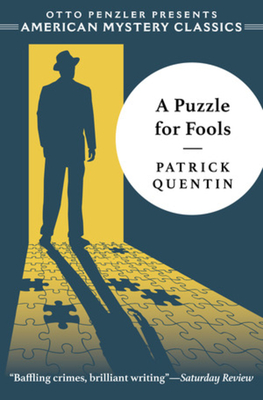 A Puzzle for Fools

Broadway producer Peter Duluth sought solace in a bottle after his wife’s death; now, two years later and desperate to dry out, he enters a sanitarium, hoping to break his dependence on drink—but the institution doesn’t quite offer the rest and relaxation he expected. Strange, malevolent occurrences plague the hospital; and among other inexplicable events, Peter hears his own voice with an ominous warning: “There will be murder.” It soon becomes clear that a homicidal maniac is on the loose, and, with a staff every bit as erratic as its idiosyncratic patients, it seems everyone is a suspect—even Duluth’s new romantic interest, Iris Pattison. Charged by the baffled head of the ward with solving the crimes, it’s up to Peter to clear her name before the killer strikes again.

Reprinted for the first time in over thirty years, A Puzzle for Fools is the atmospheric and complex mystery that first introduced Peter Duluth; the character and his love interest Iris went on to star in eight more novels, two of which were adapted for film.


Praise For A Puzzle for Fools: A Peter Duluth Mystery…

Another absolute gem unearthed by Otto Penzler and included in his American Mystery Classics series. . . . What a find!
— Booklist (Starred review)

Mr.
Quentin is a craftsman of the first class
— The Times Literary Supplement

Patrick Quentin is one of the pseudonyms of Hugh Callingham Wheeler (1912-1987), who collaborated with several other authors on the books written as by Q. Patrick and Jonathan Stagge. Wheeler was born in London but moved to the United States in 1934 and became a U.S. citizen, as did one of his writing partners, Richard Wilson Webb; he also collaborated with Martha (Patsy) Mott Kelly. After producing more than 30 mystery novels, Wheeler gravitated to the stage and wrote the book for A Little Night Music, Candide, and Sweeney Todd, all of which earned him Tony awards. Two Peter Duluth novels inspired films: Homicide for Three (1948) and Black Widow (1954), which starred Van Heflin, Gene Tierney, Ginger Rogers and George Raft.