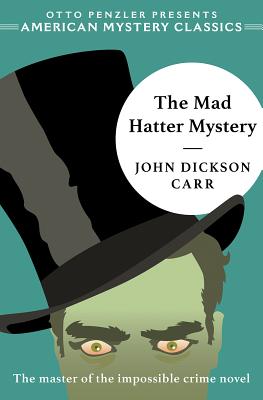 A murdered man in a top hat leads Dr. Gideon Fell to a killer with a sick sense of humor

At the hand of an outrageous prankster, top hats are going missing all over London, snatched from the heads of some of the city’s most powerful people—but is the hat thief the same as the person responsible for stealing a lost story by Edgar Allan Poe, the manuscript of which has just disappeared from the collection of Sir William Bitton? Unlike the manuscript, the hats don’t stay stolen for long, each one reappearing in unexpected and conspicuous places shortly after being taken: on the top of a Trafalgar Square statue, hanging from a Scotland Yard lamppost, and now, in the foggy depths of the Tower of London, on the head of a corpse with a crossbow bolt through the heart. Amateur detective and lexicographer Dr. Gideon Fell is on the case, and when the dead man is identified as the nephew of the collector, he discovers that the connections underlying the bizarre and puzzling crimes may be more intimate than initially expected.

Reprinted for the first time in thirty years, the second novel in the Dr. Gideon Fell series, which need not be read in any order, finds the iconic character investigating one of the most extraordinary murders of his career. A baffling whodunnit with menace at every turn, The Mad Hatter Mystery proves that Carr is the “unexcelled master of creepy erudition, swift-moving excitement and suspense through atmosphere” (New York Times).


Praise For The Mad Hatter Mystery…

Every sentence gives a thrill of positive pleasure. [The Mad Hatter Mystery] is the most attractive mystery I have read for a long time.
— Dorothy Sayers