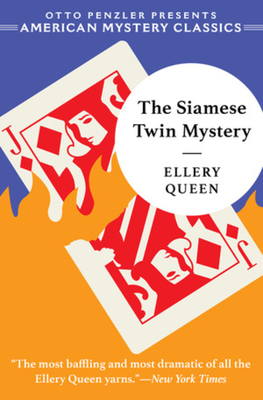 Ellery Queen takes refuge from a wildfire at a remote mountain house — and arrives just before the owner is murdered...

When Ellery Queen and his father encounter a raging forest fire during a mountain drive, the only direction to go is up — up a winding dirt road that leads to an isolated hillside manor, inhabited by a secretive surgeon and his diverse cast of guests. Trapped by the fire, the Queens settle into the uneasy atmosphere of their surroundings. Things become even more tense the following morning when the doctor is discovered dead, apparently shot down while playing solitaire the night before.

The only clue is a torn six of spades. The suspects include a society beauty, a suspicious valet, and a pair of conjoined twins. When another murder follows, the killer inside the house becomes as threatening as the mortal flames outside its walls. Faced with a complex set of alibis, motives, and evidence, Ellery Queen must rely on his powers of deduction and logic to uncover the murderer’s identity — but can he solve this whodunnit before the fire devours its subjects?

Featuring bizarre circumstances, eerie atmosphere, and a dazzling solution, The Siamese Twin Mystery is a fair play mystery in which the reader has all the necessary information needed to solve the puzzle. The seventh Ellery Queen novel (which can be read in any order), it finds the legendary sleuth facing one of the most memorable cases of his career.

Praise For The Siamese Twin Mystery (An Ellery Queen Mystery)…

A new Ellery Queen book has always been something to look forward to for many years now.
— Agatha Christie

[Ellery Queen] was the author of some of the best detective novels of our time.
— Jorge Luis Borges