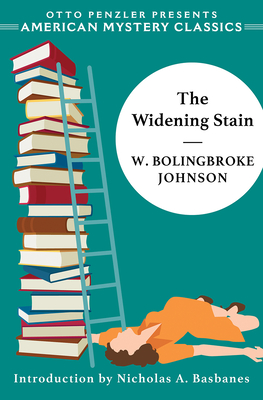 Murders plague a university library—and only an intrepid book cataloger can solve them.

For the staff of the library at the center of The Widening Stain, it’s easy enough to dismiss the death of a woman who fell from a rolling ladder as nothing more than an unfortunate accident. It’s more difficult, however, to explain away the strangled corpse of a man found inside a locked room, surrounded by rare and obscure erotica. And that’s not all—a valuable manuscript has vanished from the stacks, which means that both a killer and a thief are loose in the facility’s hallowed halls. It’s up to chief cataloger Gilda Gorham to solve the crimes but, unless she’s careful, the next death in the library might just be her own...

A humorous and literary Golden Age mystery, The Widening Stain is adorned with as many playful limericks as it is with bibliographic details. The book, which offers a satirical glimpse of academic life at an institution strongly resembling Cornell University, is one of the most beloved bibliomysteries (mysteries involving books) of all time.


Praise For The Widening Stain…

W. Bolingbroke Johnson was the pseudonym of Morris Bishop (1893-1973), an American scholar, historian, essayist, translator, and versifier. While best known for his writings on the Middle Ages and his work with light verse, he was an authority on many subjects, including the history of Cornell University, where he taught and served as the university historian. The Widening Stain is his only work of fiction.

Nicholas A. Basbanes is the author of nine works of cultural history, with a particular emphasis on various aspects of books, book history, and book culture. In addition to his books, Basbanes has written for numerous newspapers, magazines, and journals, including The New York Times, Los Angeles Times, and Washington Post, and lectures widely on a variety of cultural subjects. Among his most well-known titles are A Gentle Madness: Bibliophiles, Bibliomanes, and the Eternal Passion for Books and On Paper: The Everything of Its Two Thousand Year History.
Loading...
or support indie stores by buying on