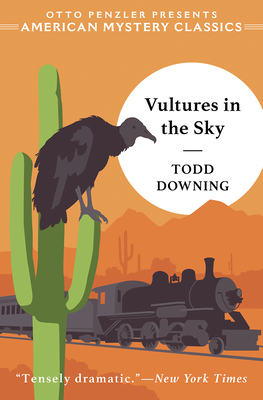 Vultures in the Sky

One of CrimeReads' "10 Novels You Should Read This December"!

A train headed for Mexico City meets murder when it stalls out in the desert . . .

The journey of the Mexico City-bound Pullman seems ill-fated from the outset — what with the engine troubles and the threat of an impending railway strike — but no one aboard expects the terror that will descend upon the luxury train between Laredo and its destination. First a man dies as the vehicle passes through a dark tunnel and then, just as United States Customs Agent Hugh Rennert begins to investigate, the train comes to a screeching halt in the middle of the desert.

More deaths follow as night falls, and when it becomes clear that a murderer is on the loose, the stationary cars transform into an isolated hall of horrors. The varied and intriguing cast of passengers begins to panic, but Rennert remains calm and collected, untangling the web of motives in a desperate search for the culprit. Will he be able to unmask the killer before the voyage ends?

A suspenseful whodunnit that charts a path through the Mexican wilderness, Vultures in the Sky highlights the best aspects of the Golden Age mystery, mixing classical detective work with a tense, closed-circle setting. The third novel in Todd Downing’s Hugh Rennert series (which can be enjoyed in any order), it shows an undeservedly forgotten author working at the top of his craft.

Praise For Vultures in the Sky…

With any luck, this latest reissue of Todd Downing’s lost classic will bring the author back into the renown he deserves [...] The writing is taut and modern, the plotting expert, and the story still resonates powerfully all these decades later.
— Dwyer Murphy - CrimeReads

“Downing doles out Mexican local color in small but expertly teasing doses, gets excellent mileage out of a cheap stickpin and several other physical clues, and produces a surprisingly varied chain of incidents in the course of whittling down the passenger list. A limited but highly proficient exercise in deduction by a forgotten author: a welcome rediscovery.”
— Kirkus

Though Vultures in the Sky has fair-play mystery construction at its core, and the escapist factor that comes with that, it takes place in a real and historically anchored world where events beyond the mystery itself continue to happen with great consequence for most people. Downing, even in the context of a no-flab detective story, does not let you forget that.

Todd Downing (1902-1974) was an author, reviewer, and teacher of mystery fiction, as well as an expert on the Choctaw language. Born in Atoka, Indian Territory, he spent most of his life in and around Oklahoma, except for a brief period studying Spanish, French, and anthropology at the National University of Mexico. He wrote six titles in the Hugh Rennert series, then turned to nonfiction, at which point he produced books on Mexican history and Choctaw grammar.

James Sallis is the award-winning author of eighteen novels, including the Lew Griffin series, the Driver series (inspiration for the 2011 film, Drive), and the John Turner series. He has also published numerous short story collections, poetry collections, literary biographies, and criticism.
Loading...
or
Not Currently Available for Direct Purchase