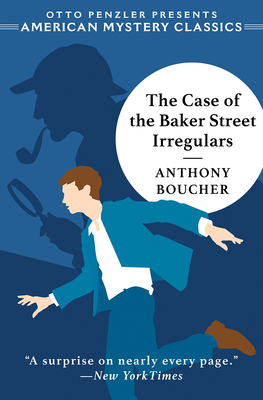 The Case of the Baker Street Irregulars

On the set of a Sherlock Holmes film, a group of experts on the Great Detective gets drawn into a puzzling murder plot

For the die-hard Sherlock Holmes fans that comprise the Baker Street Irregulars — some of them famous authors and widely-respected critics — there’s something particularly infuriating about unfaithful adaptations of Arthur Conan Doyle’s immortal works. So when they get word that a Hollywood studio has plans to produce a tough, hard-boiled interpretation of the Great Detective, written by an author who has expressed disdain not only the group and its members, but for the source material as well, they immediately express their concern, threatening the picture with a campaign of boycotts and smears.

Recognizing the influence wielded by the group, the studio invites a selection of members to visit the set, hoping to placate their complaints. But as soon as they arrive, things start to get strange, first with a series of ominous warnings, each one referencing one of Holmes’s famous cases, and soon thereafter, with murder.

A complex yet humorous whodunnit with fairly played clues, which provides the reader with all the information needed to solve the crime, The Case of the Baker Street Irregulars is sure to please Sherlock Holmes fans of all stripes, and anyone who appreciates a challenging puzzle.

Praise For The Case of the Baker Street Irregulars…

If you know your Sherlock Holmes—and even if you don’t—you will enjoy this delightfully farcical narrative, which offers a surprise on nearly every page. There is a good mystery plot, too, and the solution is the biggest surprise of all.
— The New York Times

Anthony Boucher (1911-1968) was an American author, editor, and critic, perhaps best known today as the namesake of the annual Bouchercon convention, an international meeting of mystery writers, fans, critics, and publishers. Born William Anthony Parker White, he wrote under various pseudonyms and published fiction in a number of genres outside of mystery, including fantasy and science fiction.