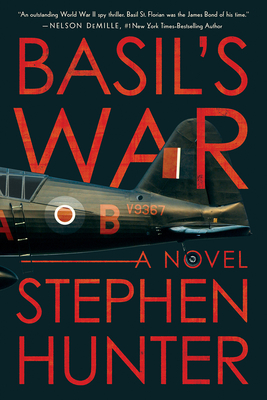 Basil St. Florian is an accomplished agent in the British Army, tasked with dozens of dangerous missions for crown and country across the globe. But his current mission, going undercover in Nazi-occupied France during World War II, might be his toughest assignment yet. He will be searching for an ecclesiastic manuscript that doesn’t officially exist, one that genius professor Alan Turing believes may hold the key to a code that could prevent the death of millions and possibly even end the war.

St. Florian isn’t the classic British special agent with a stiff upper lip—he is a swashbuckling, whisky-drinking cynic and thrill-seeker who resents having to leave Vivien Leigh’s bed to set out on his crucial mission. Despite these proclivities, though, Basil’s Army superiors know he’s the best man for the job, carrying out his espionage with enough charm and quick wit to make any of his subjects lower their guards.

Action-packed and bursting with WWII-era intrigue (much of which has basis in fact), Basil’s War is a classic espionage thriller from Pulitzer Prize-winning critic, essayist, and bestselling novelist Stephen Hunter.

A totally zippy read from start to finish. Just what I needed in these tense times.
— Madison Public Library

One of the best thriller novelists around.
— The Washington Post

The front rank of the thriller novelists.
— People

Hunter passes almost everybody else in the thriller-writing trade as if they were standing still . . . Worth every extravagant rave.
— New York Daily News

Basil’s War is a gem, a scrumptious hors d’ oeuvre from the author of the Bob Lee Swagger sniper franchise [...] A master’s class on how to write succinctly with the spare deftness of a journalist’s touch.

Stephen Hunter won the 2003 Pulitzer Prize for Criticism as well as the 1998 American Society of Newspaper Editors Award for Distinguished Writing in Criticism for his work as film critic at The Washington Post. He is the author of several bestselling novels, including Time to Hunt, Black Light, Point of Impact, and the New York Times bestsellers Havana, Pale Horse Coming, and Hot Springs. He lives in Baltimore.
Loading...
or support indie stores by buying on