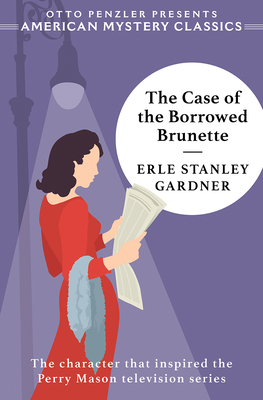 The Case of the Borrowed Brunette

A classified ad finds Perry Mason's client drawn into a murder plot, and only the sleuthing attorney can save her.

When Perry Mason stumbles upon a classified ad for a brown haired woman with very specific physical attributes, he takes note of the seemingly suspicious circumstances surrounding the job posting. Then the woman hired for the job gets in touch, describing the strange requests of her new employer—who pays her and her chaperone to stay inside an apartment and answer to another woman’s name—and Mason knows there’s a more knotted plot at play. But by the time he works out the first mystery, a second, with murder, is just getting started, and that’s only the first twist that awaits him as he endeavors to prove the innocence of “the borrowed brunette.”

Together with his crime solving team of Paul Drake and Della Street, Mason winds his way through one of the most puzzling cases of his career, involving separated ex-lovers, a tangled series of impersonations, and scores of private detectives. In order to clear his client of the charges, though, he’ll risk getting a few himself, before, in a final courtroom scene, breaking the case apart to the judge’s satisfaction.

Reissued for the first time in thirty years, The Case of the Borrowed Brunette is one of the most beloved whodunnits featuring the iconic Perry Mason character, inspiration for multiple hit television series bearing his name.

Praise For The Case of the Borrowed Brunette: A Perry Mason Mystery…

Mason may twist the rules into a corkscrew, but we can’t help but root for him anyway.
— Booklist

No one has ever matched Gardner for swift, sure exposition.
— Kirkus

With Perry Mason, Erle Stanley Gardner introduced to American letters the notion of the lawyer as a hero—and a detective—which were remarkable innovations. He even gave defense lawyers a good name to boot. His Mason books reaming tantalizing on every page and brilliant.
— Scott Turow