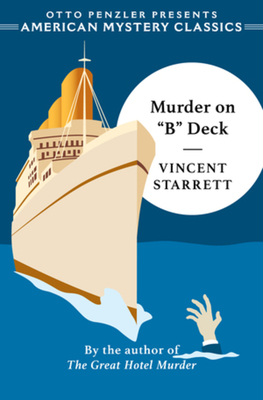 Murder on "B" Deck

A 1920s cruise ship is destined for destruction in this cozy mystery by the author of The Great Hotel Murder.

For the passengers aboard the Latakia, the transatlantic journey from New York to Cherbourg promises weeks of rest and relaxation, no matter what class of ticket they have. But after an Italian baroness is found strangled in her cabin, the situation on board becomes more tense. The main suspect soon goes overboard, creating more questions than answers: Did a guilty conscience spur a suicidal act, or was he a witness silenced by the true killer, still at large on the luxury liner.

Enter former intelligence officer Walter Ghost, tapped by the ship’s captain to play detective and solve the murder. He’s joined by his friend Dunsten Mollock, a novelist whose experience with mystery stories gives him helpful insights into the case. With clues including an amateur film, a doll, and a card from Memphis, Tennessee, it seems the duo have plenty to work with. But will they be able to solve the crime before word of the murder makes it into the steamship’s rumor mill, surely sending any guilty persons even deeper into hiding?

Originally published in 1929 and out of print for nearly a century, Murder on “B” Deck is a puzzling-yet-humorous whodunnit set in the Golden Age of transatlantic travel.

Vincent Starrett (1886–1974) was a Chicago journalist who became one of the world’s foremost experts on Sherlock Holmes. A books columnist for the Chicago Tribune, he also wrote biographies of authors such as Robert Louis Stevenson and Ambrose Bierce, various books on books and book collecting, plus Sherlockian pastiches and numerous short stories and novels. A founding member of the Baker Street Irregulars, he is perhaps known best today for The Private Life of Sherlock Holmes, an imaginative biography of the great detective.