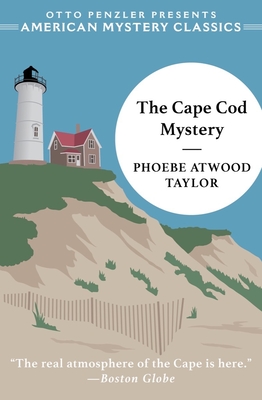 Meet Asey Mayo, Cape Cod’s answer to Sherlock Holmes. Settled down from his former life as a seafaring adventurer, Asey is a Jack-of-all-trades who uses his worldly knowledge, folksy wisdom, and plain common sense to solve the most puzzling crimes to strike the peninsula. And in this, his first case, Asey finds himself embroiled in a scandal that will push his deductive powers to their limits.

A massive heatwave is scorching the Northeast, and vacationers from New York and Boston flock to Cape Cod for breezy, cool respite. Then a muckraking journalist is found murdered in the cabin he’s rented for the season, and the summer holiday becomes a nightmare for the local authorities. There are abundant suspects among the out-of-towners flooding the area, but they ultimately fix their sights on beloved local businessman Bill Porter as the murderer—unless Asey Mayo can prove him innocent and find the true killer.

A light whodunnit with an unforgettable amateur sleuth at its center, The Cape Cod Mystery is the first novel from one of the most beloved authors of the American Golden Age mystery. The plot is adorned with insightful historical detail and a healthy dose of Cape Cod local color, making this an enjoyable and enlightening read perfect for a beachside afternoon.

Praise For The Cape Cod Mystery…

Phoebe Atwood Taylor can get more fun into a detective story than any writer at present producing books of this sort.
— New York Times

The real atmosphere of the Cape is here.
— Boston Globe

Phoebe Atwood Taylor (1909-1976) was one of the most beloved and most successful mystery authors of the 1930s and 1940s, writing under her own name and two pseudonyms, Freeman Dana and Alice Tilton. The Asey Mayo character, first introduced in The Cape Cod Mystery, went on to star in 24 novels in a series informed by the author’s generations-long family history in Cape Cod.