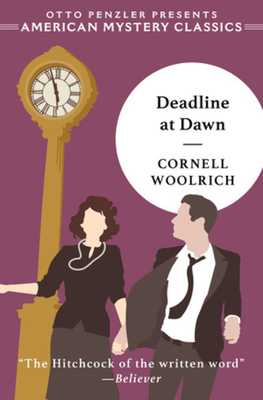 In this thrilling mystery from “the Hitchcock of the written word,” two lovers rush to solve a murder before the end of a New York night (Believer)

When Quinn first meets Bricky, she’s working as a partner-for-hire at a dancehall and he’s struggling to shake the anxiety of his guilty conscience. Earlier that day, the young man took advantage of a found key and used it to rob a stranger’s home. Now, with the purloined money in his pocket, Quinn is unable to escape the memory of his wrongdoing—and not even a night spent dancing is enough to silence his nagging thoughts.

When the dancehall closes, he and Bricky—linked, after many intimate hours, by a budding romance—return to the scene of the crime intending to restore the stolen fortune and begin a new life together, only to discover, upon arrival, that the owner of the property has been murdered. There’s evidence present that easily links Quinn to the crime, and he expects that, as soon as day breaks and the authorities learn of the gruesome scene, he will be arrested straight away. Which means that he and Bricky have only a few short hours to find the true killer and clear Quinn’s name for good.

What begins as a romance soon turns into a nightmare, as this young couple trek through the dark underbelly of old New York in a desperate race for salvation. Twisty, turny, and breathlessly told, Deadline at Dawn is an exemplary tale from the “supreme master of suspense” (New York Times).

Born George Hopley-Woolrich, Cornell Woolrich (1903–1968) is the pen name most often employed by one of America’s best crime and noir writers, whose other pseudonyms included George Hopley and William Irish, the moniker under which Waltz into Darkness was first published. His novels were among the first to employ the atmosphere, outlook, and impending sense of doom that came to be characterized as noir, and inspired some of the most famous films of the period, including Alfred Hitchcock’s Rear Window, Francois Truffaut’s The Bride Wore Black, The Phantom Lady, and celebrated B-movies such as The Leopard Man and Black Angel.

David Gordon was born in New York City. His first novel, "The Serialist," won the VCU/Cabell First Novel Award and was a finalist for an Edgar Award. It was also made into a major motion picture in Japan. His work has also appeared in The Paris Review, The New York Times, Purple, and Fence, among other publications.
Loading...
or support indie stores by buying on