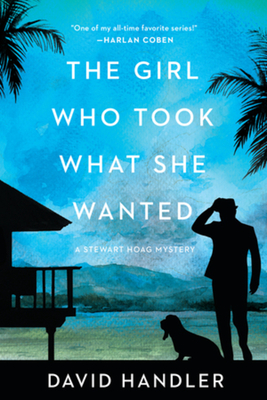 The Girl Who Took What She Wanted

In this new installment of the Edgar award-winning Stewart Hoag mystery series, the ghostwriting sleuth investigates a trail of murder amidst Hollywood’s rich and famous.

Stewart “Hoagy” Hoag hasn’t written any fiction since his debut novel rocked the literary world of the 1980s and then left him with a paralyzing case of writer’s block. Since then, he’s been reduced to ghostwriting celebrity memoirs. But his newest project could have him diving back into the world of fiction in a way he never imagined.

Nikki Dymtryk is Hollywood’s hottest reality TV star, known for her wild party lifestyle and prolific sexual conquests across the music, film, and sports industries. But when the ratings for her show Being Nikki begin to drop, the Dymtryk family engineers a new plan to keep Nikki in the limelight: reinventing the young star as a bestselling author. Nikki’s team hires Hoagy to ghostwrite a steamy romance novel showcasing the glitz and glamor of the Hollywood elite.

Reluctantly, Hoagy flies out to L.A. with his trusty basset hound Lulu to see what he’s gotten himself into with Nikki. But when he finally meets the starlet, she’s nothing like the aimless, airhead image she presents to the media. This project may just be the key to getting Hoagy’s creative juices flowing again—and staying in L.A. might also give him a chance at getting back together with his actress ex-wife, Merilee. But spending time with Nikki isn’t all parties and poolside lounging. As Hoagy gets closer to the young woman, he begins to uncover the Dymtryk family’s dark secrets. Secrets that are worth killing for.


Praise For The Girl Who Took What She Wanted: Stewart Hoag Mysteries…

David Handler is the Edgar Award-winning, critically acclaimed author of several bestselling mystery series. He began his career as a New York City reporter, and wrote his first two novels—Kiddo (1987) and Boss (1988)—about his Los Angeles childhood. In 1988 he published The Man Who Died Laughing, the first of his long-running series of mysteries starring ghostwriter Stuart Hoag and his faithful basset hound Lulu.
Loading...
or support indie stores by buying on