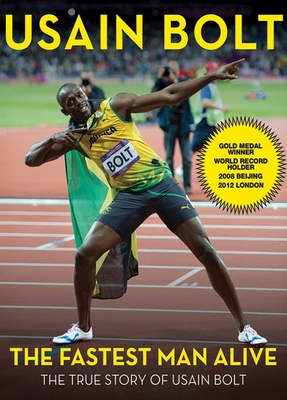 The True Story of Usain Bolt

A skinny kid from the Jamaican parish of Trelawny, Usain Bolt’s life changed in August 2008 when the Olympic men’s 100-meter starter pistol was followed just 9.69 seconds later by his streak across the finish line and the first of his three gold medals was placed around his neck. In this illustrated celebration of his influences, background, and career trajectory, Bolt shares his story of growing up playing cricket and soccer, and discovering that he could run fast—very fast. He shares stories of his family, friends, and the laidback Jamaican culture, and reveals what makes him tick, where he gets his motivation, and where he takes his inspiration. He tells of the dedication and sacrifices required to get to the top, and also discusses fast food, partying, music, fast cars, and that signature lightning bolt pose.

Usain St. Leo Bolt is a thirty-year-old phenomenon. At the 2008 Summer Olympic Games, he won gold in the 100-meter (9.69 seconds), the 200-meter (19.30 seconds), and the 4x100-meter relay (37.10 seconds), becoming the first man to win three sprinting events at a single Olympics since Carl Lewis in 1984. More astonishingly, Bolt is the first man to set world records in all three events at a single Olympics. At the 2012 Summer Olympics in London, he defended his 100-meter and 200-meter titles, winning gold in both events, shattering the Olympic record in the 100-meter (9.63 seconds), and becoming the first Olympian to win back-to-back sprint doubles. In 2016, in Rio, he extended the winning streak by capturing his third gold medals in the 100-meter final, 200-meter final, and 4x100-meter relay. He lives in Jamaica.
or
Not Currently Available for Direct Purchase