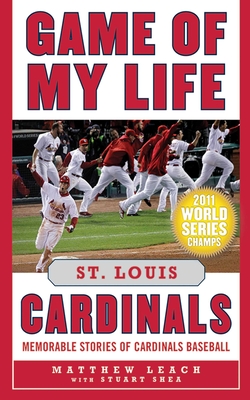 This is a book that no Cardinals fan should be without. Read about Ken Boyer’s grand slam in the 1964 World Series against the Yankees, Ozzie Smith game winning dinger in the 1985 NLCS, and David Eckstein and the 2006 World series. And more!

Fans will be excited to find out what was going through the heads of their favorite players when it matter most to their teammates and fans: Adam Wainwright on striking out Carlos Beltran, Scott Rolen on beating Roger Clemons with the odds in the Rocket's favor; Jason Isringhausen on putting the team first.

Dating back to the Gas House Gang of the 1930s and up to the club’s most recent World Championship in 2006, being a Cardinal has means a style of play, a level of dedication, and a pride in being a member of a special group.

This updated edition of Game of My Life St. Louis Cardinals exhibits not always the best game of someone’s career, but rather, the moment that stands out the most.