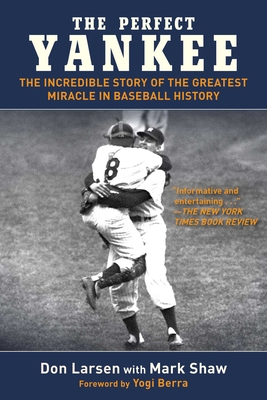 The Incredible Story of the Greatest Miracle in Baseball History

It was one perfect moment, one singular feat unparalleled in the half a century of baseball that followed. It was Game 5 of the 1956 World Series. In an age when nobody spat in anyone’s face, strikes were called only on the field, and New York was baseball’s battlefield, Don Larsen pitched the only no-hitter ever recorded in the World Series. Joe DiMaggio called it the best-pitched game he ever saw as a player or spectator. Yogi Berra said he felt like a kid on Christmas morning. And Mickey Mantle said, “For one day, Don Larsen was the greatest pitcher in baseball history.”
Now readers can relive that moment of greatness in The Perfect Yankee. With a deft pen and an announcer’s enthusiasm, Larsen walks readers through each inning of that miraculous game. A must-read for any baseball fan.

Mark Shaw, the author of more than twenty books, was a criminal defense attorney before becoming a television legal analyst for Good Morning America. He went on to correctly predict the outcomes of both the Mike Tyson and O. J. Simpson trials for, among others, CNN, ABC, and ESPN. He wrote several columns analyzing the Tyson case for USA Today. In 2004, he analyzed the Kobe Bryant case for ESPN and USAToday.com. He lives in Superior, Colorado.
or
Not Currently Available for Direct Purchase