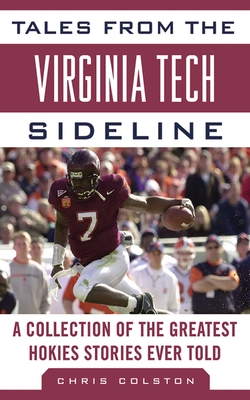 Tales from the Virginia Tech Sideline

"Fans of Virginia Tech, and they are many, will delight in Chris Colston's Tales from the Virginia Tech Sideline."—Richmond Times-Dispatch

What started with a bunch of gangly teens playing ball on a plowed wheat field has become one of the most exciting powerhouses in college football history.

Fans of this raucous and indomitable team get to relive all the great moments with this revised edition of Tales from the Virginia Tech Sideline. Virginia Tech alum and former editor of the Hokie Huddler Chris Colston shares the school’s greatest football stories and anecdotes.

The Virginia Tech Hokies football team has had 139 players drafted into the National Football League, nine players taken in the first round and two overall number one picks (Bruce Smith in 1985 and Michael Vick in 2001). Eight former Virginia Tech players have been selected to a Pro Bowl, twelve have won an NFL championship and one (Smith) has been elected to the Pro Football Hall of Fame.

From the days of Miles Stadium to Beamerball, Hokies fans will recapture all the excitement of the most well known games.