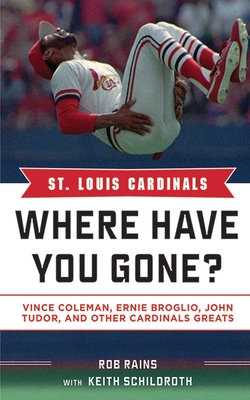 Where Have You Gone? Vince Coleman, Ernie Broglio, John Tudor, and Other Cardinals Greats

The St. Louis Cardinals are a team steeped in history and a winning tradition. For proof look no further than the epic 2011 World Series! The secret to their success? It’s those special players who have been lucky enough to don the Birds at Bat. But whatever happened to those players once the bright stadium lights were dimmed and the cleats were hung up for good? St. Louis Cardinals: Where Have You Gone? provides the fascinating answer as veteran sportswriter Rob Rains catches up with over thirty-five former Redbirds in this one-of-a-kind volume. Fans will delight in hearing about the post-baseball careers of stars from every era. Dick Groat shares his return to the sport closest to his heart: basketball; Bob Tewksbury hits the books and learns to write papers again as he completes his master’s degree in sport psychology; and Vince Coleman shares his playing skills with a new generation as a minor league coach and celebrity golfer. Life after baseball can be an unforeseen business venture, a few rounds of charity golf, 788 acres of seclusion, a minor league dugout, a PhD, or a blessing in disguise—whatever the outcome, it’s always an adventure any true Cardinals fan would love to share.

Rob Rains is the author or co-author of nine sports books, including Mark McGwire: Home Run Hero for St. Martin's Press. He also wrote The St. Louis Cardinals: The 100th Anniversary History, as well as co-authored Red: A Baseball Life with Cardinal Hall of Famer, Red Schoendienst, and Jack Buck: That's a Winner! with broadcaster Jack Buck. A frequent contributor to The Sporting News, Rains lives with his family in St. Louis.
Loading...
or
Not Currently Available for Direct Purchase