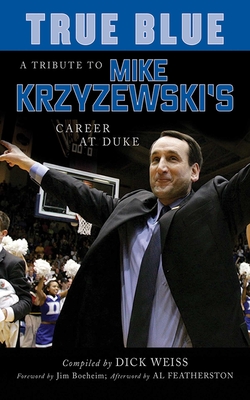 A Tribute to Mike Krzyzewski's Career at Duke

It’s been over thirty years since Mike Krzyzewski became the head basketball coach at Duke University. And on November 15, 2011, Coach K became the most successful coach in NCAA Division I men’s basketball history with his 903rd victory. Now the impact and inspiration of this living legend is captured in this newly revised edition of True Blue. In this one-of-a-kind volume, Dick “Hoops” Weiss brings together over twenty of the friends, colleagues, and players who know Coach K best. From the reminiscences of Tom Butters, the A.D. who hired him, to the analysis of ESPN legend Dick Vitale, who covers the ACC on a regular basis, this book provides unparalleled, intimate insights into the Krzyzewski era at Duke. Players like Johnny Dawkins, Danny Ferry, Christian Laettner, Grant Hill, Shane Battier, and more all recall how they were recruited, played for The Captain, and emerged from their years at Duke as men prepared to take their places in the world. True Blue isn’t just a chronology of wins and losses. It is a portrait of a complex man who conceived and executed a simple plan: to make Duke basketball and himself the best they can be.

Jim Sumner is a historian, scholar, and writer with a passion for southern sports. A graduate of Duke University, Sumner worked as a public historian for the North Carolina Division of Archives and History for thirty years. During that time he helped establish and curate the permanent North Carolina Sports Hall of Fame exhibit at the North Carolina Museum of History. He has received numerous awards including being named a member of the Order of the Long-Leaf Pine, the highest civilian honor available to citizens of North Carolina. He is a columnist for Go Duke: the Magazine, Duke Basketball Report, goduke.com, and the Collegechalktalk.com. He lives in Raleigh, North Carolina.
Loading...
or
Not Currently Available for Direct Purchase