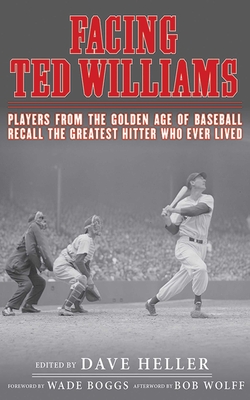 "The Splendid Splinter," Teddy Ballgame," The Kid"—no matter the nickname, Ted Williams was one of the most accomplished hitters in baseball history. He was the last man to hit .400 in a single season, a 19-time All-Star, a two-time American League MVP, a two-time winner of the Triple Crown, and an inductee into the National Baseball Hall of Fame in 1966 . . . all while serving his country in World War II and the Korean War.

Far from a conventional biography, Facing Ted Williams aims to offer a different perspective with testimonials from teammates and opponents alike, on how Williams was regarded among his peers. See Ted Williams through the eyes of pitchers struggling to put a fastball past his bat, the infielders and outfielders adjusting their positions in the hopes that they can fill the hole where a frozen rope might land, and the catchers strategizing a Williams at-bat, pitch-by-pitch.

Facing Ted Williams provides riveting insights from many baseball legends, including Hall of Famer Bob Feller; 1956 World Series MVP Don Larsen; and 1952 American League MVP Bobby Shantz; as well as many others.
Whether you’re a Red Sox fanatic, a casual baseball fan, or perhaps just an admirer of the fabled war hero and slugger, this book is sure to be a fresh and compelling look at this classic baseball icon. Much like Williams himself, Facing Ted Williams is sure to be a home run for all walks of baseball fandom.

Dave Heller spent six years as a freelance writer in Cincinnati, while also appearing in several newspapers (Washington Post) and magazines. He recently spent five years as the lead editor at CBS SportsLine.com and is currently a sports web producer for the Milwaukee Journal Sentinel and a contributor at Seamheads.com.

Wade Boggs is a former baseball player who spent eighteen years in the big leagues with the Boston Red Sox, New York Yankees, and Tampa Bay Devil Rays (now known as the Rays). On August 7, 1999, he became just the twenty-third player to record 3,000 hits for a career and the first to do so with a home run. He retired in 1999, finishing his career with 3,010 hits (currently twenty-sixth all-time), a .328 batting average (currently thirty-third all-time), and was elected into the National Baseball Hall of Fame in 2005.

Bob Wolff is the longest-running sportscaster in television and radio history, now in his ninth decade behind the microphone. He is the only broadcaster in history to call the play-by-play championships of all four major pro sports, including Don Larsen’s perfect game in the 1956 World Series. He’s enshrined in the baseball and basketball halls of fame, the National Sportscasters and Sportswriters Hall of Fame, as well as numerous others. In 2009, the broadcast booth at Nationals Park in Washington was named in his honor.
Loading...
or
Not Currently Available for Direct Purchase