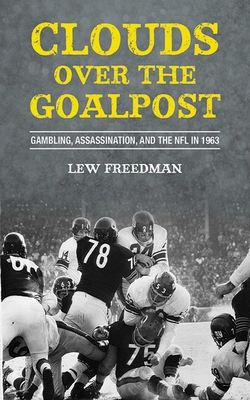 Clouds over the Goalpost

Gambling, Assassination, and the NFL in 1963

The pro football season of 1963 was dominated by the unexpected. In April, months prior to the beginning of play, it was revealed that two All-Star players, Paul Hornung and Alex Karras, were gambling on the sport and would be suspended from play for at least a year. Even worse, in May, one of the league’s bigger-than-life personalities, Big Daddy Lipscomb, was found dead, with police saying he perished from a heroin overdose, something those who knew him best still dispute.

As play began in September, the Pro Football Hall of Fame opened its doors in Canton, Ohio, the same town where the National Football League was founded in 1921 and inducted its first class. Also, the war for players and prestige raged with the upstart American Football League trying to obtain equal footing in the public eye.
On the field, it was to be the year the Chicago Bears and their aging owner-coach George Halas knew glory once more, fighting off the latest dynasty Green Bay Packers led by Vince Lombardi in a season-long chase for the Western Division title. Yet even that was overshadowed by the assassination of President John F. Kennedy. While the nation mourned and other sports leagues suspended activity, the NFL played on with its regular season that sad weekend—a choice commissioner Pete Rozelle later called the worst mistake of his tenure.

Clouds over the Goalpost is filled with controversy not only on the field, but off it as well. From the various suspensions to an exciting championship game between the Bears and Giants, 1963 was a year that the NFL would never forget—for both the good and the bad.