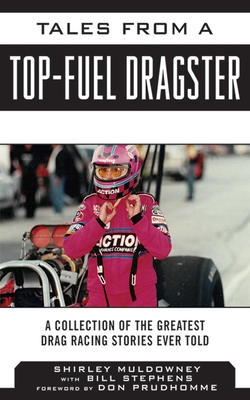 Tales from a Top Fuel Dragster

Shirley Muldowney not only broke the gender barrier in the National Hot Rod Association in the 1970s, but she also completely rewrote the record books in Top Fuel Eliminator, drag racing’s quickest and fastest category. She was the first woman to receive a Top Fuel license from the NHRA. Between 1977 and 1982, Muldowney won three NHRA Top Fuel championships—the first female ever to win a title in any professional motorsport. She won the prestigious NHRA US Nationals in 1982 and was recently inducted into the International Motorsports Hall of Fame. By the time she retired at the end of the 2003 season, Muldowney had become one of the most recognized and celebrated race car drivers in history.

Tales from a Top-Fuel Dragster is an unabashed collection of stories, anecdotes, and opinions in Muldowney’s own unvarnished style of storytelling, laced with her straightforward, take-no-prisoners approach. She has spent her entire lifetime telling it like it is, standing up to the establishment, and refusing to do anything other than in her own way. Politically correct? Hardly. Readers are encouraged to strap themselves in when she shares her many tales. It’s the whole truth and nothing but the truth according to the legendary Shirley Muldowney.