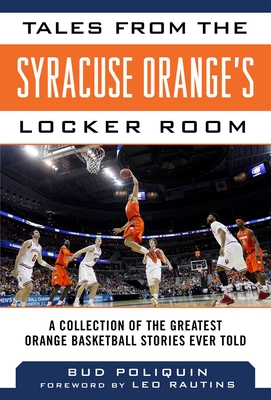 Orange is a state of mind for fans of Syracuse University basketball. Think Orange and images of greatness appear, from Vic Hanson in the Roaring ’20s through Carmelo Anthony in the 21st century. Think Orange and the sounds of glory are heard, from old Archbold Gym to the gleaming Carrier Dome. Think Orange and the memories of 1,607 victories are stirred, from SU’s first win in 1901 over Cornell to its 2003 triumph over Kansas that brought home the national championship. Many of the stories that have contributed to the phenomenon known as Orangemen basketball now come to life in Bud Poliquin’s Tales from the Syracuse Orange's Locker Room.

Dave Bing, Jim Boeheim, Jim Brown (yes, he played hoops, too), Bouie and Louie, Leo Rautins, Pearl Washington, and Derrick Coleman—all of them and numerous other SU legends join Hanson and Anthony in the pages of this anecdotal anthology of Syracuse University basketball, certain to complete the bookshelf of any Orangemen fan. This book looks at the team’s infamous 27-game losing streak in the early 1960s; Roy’s Runts; the Pearl’s stunning half-court buzzer-beater that knocked off Boston College in 1984; the fabulous Final Four runs of 1975, 1996, 2003, and 2013, with current players Michael Carter-Williams, James Southerland, and Brandon Triche; and Anthony’s freshman brilliance that delivered the school’s first-ever NCAA tournament title.

Leo Rautins played basketball at Syracuse University for three seasons (1980– 1983) and was named to the Syracuse All-Century Team in 2000. In 1983, Rautins became the first Canadian ever drafted in the first round of the NBA draft. Rautins has been a broadcaster for the Toronto Raptors since the team’ s inception in 1995. He lives in Toronto.
or
Not Currently Available for Direct Purchase
Copyright © 2020 American Booksellers Association