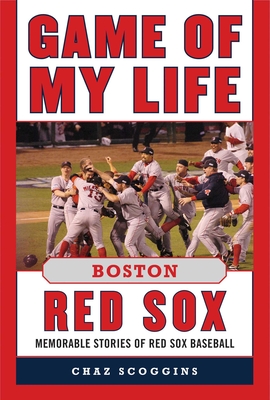 Recalling some of the greatest players in Red Sox history and some of their greatest games, author Chaz Scoggins traces back over 70 years, to the very start of the seminal Yawkey era, in Game of My Life Boston Red Sox. Beginning with Bobby Doerr, the Hall of Fame second baseman who joined the team in 1937, the book touches on players and their most memorable games from every decade, right up to those who finally experienced the exhilaration of winning that elusive World Series in 2004. Among the many players who recount the most memorable games in their Red Sox careers are Johnny Pesky, Dominic DiMaggio, Mel Parnell, Frank Malzone, Bill Monbouquette, Rico Petrocelli, Fred Lynn, Butch Hobson, and Bruce Hurst. Their recollections and stories linking eight decades of Boston Red Sox baseball and revealing many details unknown until now will undoubtedly awaken fond but probably long-forgotten memories of lifelong Boston fans themselves.

Chaz Scoggins is an award-winning writer who covered the Red Sox for The Lowell Sun beginning in 1973, up until his retirement in April 2013. Scoggins has also served as the official scorekeeper for the Red Sox and president of the Baseball Writers Association of America. He has also been a broadcaster for Lowell Spinners games. Scoggins is a graduate of the University of Massachusetts–Lowell.
Johnny Pesky was a Major League Baseball player and coach. He passed away in 2012.
Loading...
or
Not Currently Available for Direct Purchase