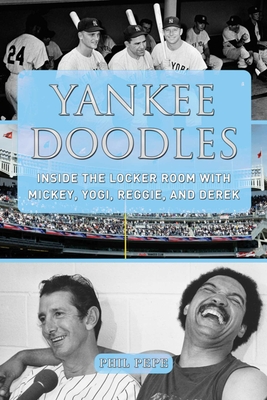 Inside the Locker Room with Mickey, Yogi, Reggie, and Derek

Phil Pepe spent years as the New York Daily News Yankee beat reporter, rubbing shoulders with countless Yankee greats, from Mickey Mantle and Yogi Berra to Derek Jeter and Mariano Rivera. While he was there to report on the action that occurred on the field, as well as the many disruptions occurring in the locker room—especially during the tumultuous seventies when Billy Martin and the “Boss” were constantly at one another’s throats—that directly affected the team’s performance on the field, Pepe also saw a world that never made the papers.

Yankee Doodles humanizes the legends we have come to love and worship. We get to know the players as Pepe did, once the lights and cameras were turned off. For instance, Pepe recounts the story of Jackson’s miraculous three homerun World Series game when, in his exhilaration, Jackson literally gave Pepe the pants off his butt! This simple story shows a side of Reggie Jackson—a Yankees superstar—that reminds us that these men are often nothing more than boys playing a game they love.

Other favorites include the time Pepe went shopping with Berra, who was looking for a birthday present for his wife; the day Yankees pitchers Fritz Peterson and Mike Kekich swapped wives, children, homes and even pet dogs; when Mantle graciously paid for a stranger’s dinner; and so much more!

This book offers a behind-the-scenes glimpse at some of the greatest Yankee heroes. It is a must-read for Yankee fans and baseball lovers alike!

Phil Pepe has written more than fifty books, mostly on baseball, including collaborations with Mickey Mantle (the New York Times bestseller My Favorite Summer: 1956), Whitey Ford, Billy Martin, and Jim Kaat. His latest work is Core Four: The Heart and Soul of the Yankees Dynasty. He is a former Yankees beat writer for the New York Daily News and a past president of the Baseball Writers’ Association of America.
Loading...
or
Not Currently Available for Direct Purchase