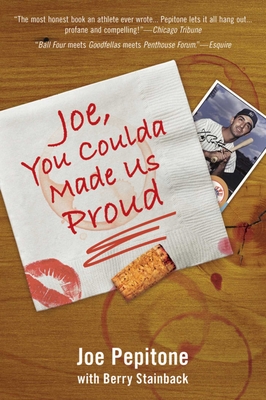 Joe, You Coulda Made Us Proud

At age seventeen Joe Pepitone signed with the New York Yankees, and soon experts were predicting that he would be the team’s next superstar. He could run, throw, and field, and he had a sweet home run swing.

But during his twelve years in the major leagues Pepitone devoted most of his energy to swinging off the field. He blew his career, destroyed two marriages, lost custody of three children, and came very close to a nervous breakdown. At the age of thirty-three he quit baseball for good and finally admitted that for most of his life, he’d been living a lie. He’d been acting the carefree clown in order to cover up immense inner pain.

In Joe, You Coulda Made Us Proud, first published in 1975, Pepitone reveals what was behind his wild behavior. He does so in the most devastatingly honest terms, holding back none of the embarrassment, anguish, and guilt that perpetually haunted him. He tells of the father he loved so much, “Willie Pep” Pepitone, the toughest man in a tough Brooklyn neighborhood. Obsessed with making Joe a baseball star, Willie beat his son when he failed to meet expectations. One night, enraged at his father, Joe said, “Mom—I wish he’d die!” Willie died the next day.

Along with pain, the book has plenty of humor. Pepitone tells of partying with Frank Sinatra and Mickey Mantle, carousing with groupies and hookers, and “living the life” of a famous ballplayer in the sixties and seventies.

One of the most moving, honest, and hilarious books ever written by an athlete, Joe, You Coulda Made Us Proud was selected by Esquire magazine as one of the “20 best baseball books ever.”

Joe Pepitone played for the New York Yankees, Houston Astros, Chicago Cubs, and Atlanta Braves. He lives in Pennsylvania.
Berry Stainback (1935–2014) was an editor of Sport magazine, associate editor of Life, and editor of True. He was the author of nearly twenty books.
Loading...
or support indie stores by buying on