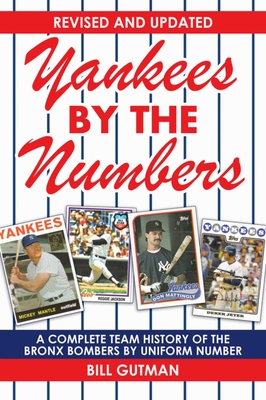 Yankees by the Numbers

A Complete Team History of the Bronx Bombers by Uniform Number

What do Mark Koenig, Red Rolfe, Frank Crosetti, Sandy Alomar, Bobby Murcer, Wayne Tolleson, and Derek Jeter all have in common? They all wore number 2 for the New York Yankees, even though nearly eight decades have passed between the first time Koenig buttoned up a Yankee uniform with that number and the last time Jeter performed the same routine.

The 1929 New York Yankees were the first Major League baseball team to begin regularly wearing uniform numbers. That team, led by superstars Babe Ruth and Lou Gehrig, was assigned its numbers based on the batting order. This is why Ruth wore 3, Gehrig 4, and so on. Soon other teams in other cities caught on, and before long every team in baseball were wearing numbers. But like many things in baseball history, it all started in the Bronx.

Over 1,500 players have worn pinstripes in their careers, makes for a lot of good stories. Yankees by the Numbers tells those stories for every Yankee since ’29—from Earle Combs (the original #1) to Charlie Keller (the only Yankee to ever wear #99)—providing insightful and humorous commentary about the more memorable players, from a fan’s perspective. Each chapter also features a fascinating sidebar that reveals which players were the most obscure to wear a certain number, and also which numbers produced the most wins, home runs and stolen bases in club history. For data seekers, a “Yankees Alphabetical Roster” is a complete listing of every single Yankee since 1929, the numbers they wore, and their years of service at the House that Ruth Built.

Updated through the 2014 baseball season, this second edition of Yankees by the Numbers is a book that every Yankee fan, young or old, should own and cherish.

Bill Gutman is a sportswriter and author. His books include Tales from the 1969–1970 New York Knicks, What if the Babe Had Kept His Red Sox? and Jeremy Lin.
Loading...
or
Not Currently Available for Direct Purchase