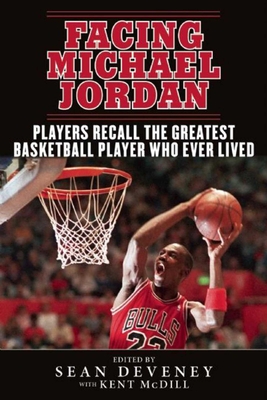 Players Recall the Greatest Basketball Player Who Ever Lived

Whatever you call him, Michael Jeffrey Jordan can be considered one of the greatest basketball players of all time. During his career, Jordan won six NBA championships and was a fourteen-time All-Star, five-time NBA MVP, and six-time NBA Finals MVP. To say Jordan was dominant during his career would be a severe understatement.

Charles Barkley
Hubie Brown
Robert Parish
Terry Porter
Jeff Van Gundy
And many more!
From the moment that Jordan stepped onto the court, he dominated the game of basketball. No matter who comes around today or tomorrow, Jordan’s name and the number 23 will resonate with basketball fans for all eternity.

Sean Deveney has been a writer and editor at Sporting News since 1999, covering all aspects of sports. He has authored four books, including The Original Curse, Facing Ted Williams, and Before Wrigley Became Wrigley.
or
Not Currently Available for Direct Purchase
Copyright © 2020 American Booksellers Association