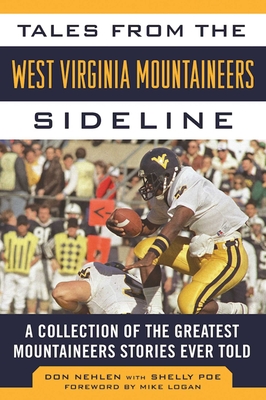 A Collection of the Greatest Mountaineers Stories Ever Told

No one knows Mountaineers football better than Don Nehlen, head coach of the Mountaineers from 1980 until 2001. Now fans of this dynamic collegiate powerhouse will relive the greatest moments in West Virginia football through the eyes of its most successful coach.

When Coach Nehlen arrived in Morgantown in December 1979, he had a large task in front of him—turn a losing team into a force to be reckoned with. In Tales from the West Virginia Mountaineers Sideline, first published in 2006 and now revised, Nehlen, along with former Sports Information Director Shelly Poe, share how he made it happen. Nehlen explains his theories about coaching, the staff that supported him, and the strategies that he employed to create a stronger team. He shares stories about some of his best players like Major Harris, Barrett Green, Rich Braham, and Marc Bulger. He gives the play-by-play for some of his biggest wins and most disappointing losses. Coach Nehlen guides you through the legendary undefeated seasons of 1988 and 1993. In addition, he shares his Hall of Fame experience with you, and muses about the future of college football. Without a doubt, this insider’s look at West Virginia football is a must-have for any Mountaineers fan.

Don Nehlen elevated the Mountaineer football program to national prominence during his twenty-one-year tenure at West Virginia University (1980–2001). He was named National Coach of the Year twice: once in 1988 after he led his team to an undefeated season (11–0), and again in 1993 when his team went undefeated (11–0) once again. He won 202 total collegiate games at Bowling Green and WVU, and took the Mountaineers to 13 Bowl games. One of the key players in the formation of the Big East football conference, Nehlen was inducted into the College Football Hall of Fame in 2005.

Shelly Poe is the Assistant Athletic Director at Auburn University. She previously served as the chief media liaison for the Ohio State football program. A 1985 West Virginia University 1985 graduate, Poe immediately began working in WVU’s Sports Information department. In 1988 she rose to the position of sports information director and continued to work with her beloved Mountaineers. In 2006, Poe was the first-ever WVU publicist inducted into the College Sports Information Directors of America Hall of Fame.

Mike Logan played cornerback for WVU in the 1990s. Selected in the second round of the NFL draft by the Jacksonville Jaguars, Logan moved to the Pittsburgh Steelers in 2001 and was part of the Super Bowl XL team. He retired from the NFL in 2007.
Loading...
or
Not Currently Available for Direct Purchase