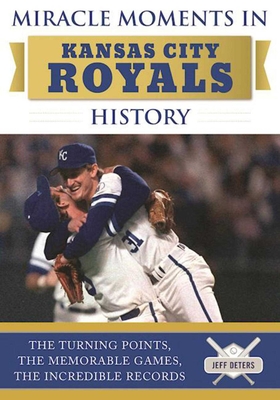 The Turning Points, the Memorable Games, the Incredible Records

Since their founding in 1969, the Kansas City Royals have provided memorable moments to generations of fans in America’s heartland and beyond.

Miracle Moments in Kansas City Royals History is the ultimate tribute book for die-hard fans of the team from the City of Fountains. Jeff Deters recounts the most memorable moments in Royals history, including:

Steve Busby’s throwing two no-hitters in each of his first two season, a first for a big-leaguer;
George Brett’s hitting .333 to win his first batting title while leading the Royals to the AL West championship in 1976;
Brett’s second batting title in 1980 as he just misses batting .400 for the season;
Dick Howser’s firing by the Yankees and revenge five years later as he manages the Royals to a championship in 1985;
Bo Jackson’s electrifying but brief career as a Royal while starring for the Los Angeles Raiders;
The Royals’ sweep of the Orioles in the 2014 ALCS to return to the World Series in 29 years;
The magnificent 2015 season capped by a World Championship.

Miracle Moments in Kansas City Royals History is much more than just a comprehensive resource. It recounts the hidden stories behind one of the most successful franchises in baseball..

Jeff Deters is a sports reporter for The Topeka Capital-Journal, where he covers the Kansas City Royals. He lives in Lawrence, Kansas.
Loading...
or support indie stores by buying on
(This book is on backorder)