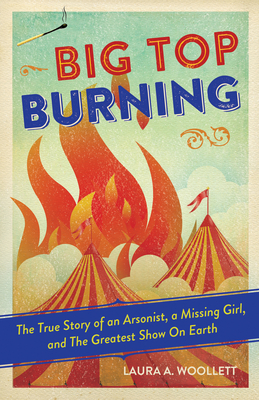 The True Story of an Arsonist, a Missing Girl, and The Greatest Show On Earth


On July 6, 1944, thousands of fans made their way to Barbour Street in Hartford, Connecticut, to see the Ringling Bros. and Barnum & Bailey Circus performance. Not long after the show’s start, a fire broke out and spread rapidly as panicked circus-goers pushed and scrambled to escape. Within 10 minutes the entire big top had burned to the ground, and 167 people never went home.

Big Top Burning recounts the true story of one of the worst fire disasters in US history. It follows the tragic stories of the Cook family—including children Donald, Eleanor, and Edward, who were in the audience that day—and 15-year-old Robert Segee, a circus employee with an incendiary past. Drawing on primary sources and interviews with survivors, author Laura Woollett guides readers through several decades of investigations and asks, Wasthe unidentified body of a little girl nicknamed“Little Miss 1565” Eleanor Cook?Was the fire itself an act of arson—anddid Robert Segee set it? Young readers are invited to evaluate the evidence and draw their own conclusions.

Combining a gripping disaster story, an ongoing detective and forensics saga, and vivid details about life in World War II–era America, Big Top Burning is sure to intrigue any history or real-life mystery fan.

Praise For Big Top Burning: The True Story of an Arsonist, a Missing Girl, and The Greatest Show On Earth…

“While walking readers ages 11 and older through the disaster and its long investigative aftermath, Ms. Woollett takes pains to point out how the world 70 years ago differed from our own.” —The Wall Street Journal


"This chronological account vividly describes the circus, the fire, the rescue, and the medical care that followed. History buffs and fans of forensic television shows will especially appreciate this exploration of one of the worst fires in American history.” —Kirkus Reviews

"This meticulously researched book will draw readers in to a terrifying disaster story—and an unsolved mystery.” —Steve Sheinkin, award-winning author of The Port Chicago 50 and Bomb! The Race to Build—and Steal—the World’s Most Dangerous Weapon

“Big Top Burning is a gripping narrative of one of our country’s most horrific yet largely unknown disasters.” —The Republican-American

“Wollett brings the incident alive by combining the historical accounts with the mystery surrounding the disaster. The author does a stellar job describing the gripping story in an age-appropriate way. For example, she focuses on the mystery of an unidentified little girl. Youth will enjoy evaluating the evidence and drawing their own conclusions. This short book would be a good choice for reluctant readers looking for an interesting history project topic.” —Annette Lamb, Teacher Librarian


“This piece of engaging nonfiction would lend itself to analysis, prediction, and as a catalyst for future research. The inclusion of notes, bibliography, and image credits make this a great mentor text.” —School Library Connection

“This is nonfiction at its very best.” —Tulsa Book Review

Laura A. Woollett has a master’s degree in children’s literature from Simmons College and is a writer and editor of literacy curriculum for kids and young adults. Originally from South Windsor, Connecticut, Laura now lives in Massachusetts with her husband, daughter, and two cats.
Loading...
or
Not Currently Available for Direct Purchase