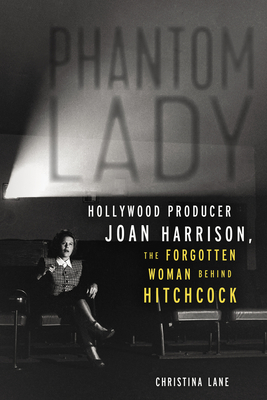 In 1933, Joan Harrison was a twenty-six-year-old former salesgirl with a dream of escaping both her stodgy London suburb and the dreadful prospect of settling down with one of the local boys. A few short years later, she was Alfred Hitchcock’s confidante and one of the Oscar-nominated screenwriters of his first American film, Rebecca. Harrison had quickly grown from being the worst secretary Hitchcock ever had to one of his closest collaborators, critically shaping his brand as the “Master of Suspense.”

Harrison went on to produce numerous Hollywood features before becoming a television pioneer as the producer of Alfred Hitchcock Presents. A respected powerhouse, she acquired a singular reputation for running amazingly smooth productions— and defying anyone who posed an obstacle. She built most of her films and series from the ground up. She waged rough-and-tumble battles against executives and censors, and even helped to break the Hollywood blacklist. She teamed up with many of the most respected, well-known directors, writers, and actors of the twentieth century. And she did it all on her own terms.

Author Christina Lane shows how this stylish, stunning woman became Hollywood’s most powerful female writer-producer—one whom history has since overlooked.

“Christina Lane’s Phantom Lady is a revelation, even for those of us who thought we knew Hitchcock backward and forward. I was stunned at how early Joan Harrison came on board, how crucial she was in the evolution of the iconic Hitchcock blonde, and how smart she was both on the script level and in handling the sometimes crass behavior of the man. Lane corrects what we now see as the monumentally biased biographies that minimized Joan’s contribution. And did I mention it’s a riveting read!” —Molly Haskell, author of From Reverence to Rape: The Treatment of Women in the Movies

“A whip-smart beauty, Joan Harrison answered an advertisement and became indispensable to Alfred Hitchcock. This deeply researched and always thoughtful book will engross fans as well as scholars.” —Patrick McGilligan, author of Alfred Hitchcock: A Life in Darkness and Light

“Joan Harrison’s contributions to cinema, particularly in the realms of psychological suspense and film noir, have been overlooked and undervalued for too long. Blame a legacy of male-dominated scholarship. All praise, then, to Christina Lane for her diligent, scrupulous research and adroit narrative. Finally this remarkable woman, so much more than ‘Hitchcock’s protégée,’ gets her solo turn in the spotlight.” —Eddie Muller, host of Turner Classic Movies’ Noir Alley

“Christina Lane puts the spotlight on the previously underappreciated Joan Harrison, who threaded the needle of Hollywood as a successful writer-producer and valiant friend when this was no small feat. Harrison worked with and played with all the big names—David O. Selznick, Clark Gable, Carole Lombard, Joan Fontaine, Robert Montgomery, and John Huston—along with Hitchcock and is an important reminder that film is the ultimate collaborative art.” —Cari Beauchamp, author of Without Lying Down: Frances Marion and the Powerful Women of Early Hollywood

“Phantom Lady gives us an opportunity to understand the unique and complicated bond Joan Harrison shared with Alfred Hitchcock. She went from secretary to his star writer, collaborator, assistant, and muse. He gave her complete autonomy, but he never gave her credit. Joan Harrison was a remarkable woman of taste and style who helped establish the Hitchcock ‘brand.’ She may be the greatest female producer you’ve never heard of.” —Illeana Douglas, actress, producer, and author of I Blame Dennis Hopper: And Other Stories from a Life Lived In and Out of the Movies

“Joan Harrison never wrote a bad movie. Joan Harrison never produced a bad movie. And when she moved into television as the producer of Alfred Hitchcock Presents it could honestly be said that she never made a shoddy television episode. Christina Lane’s Phantom Lady brings this fascinating, beautiful, and—most of all—talented woman out of time’s shadow with a biography that navigates Harrison’s life with the same savvy Harrison used to thrive in Hollywood. It restores her to her rightful position as a primary architect of film noir.” —Scott Eyman, author of John Wayne: The Life and Legend

"At last!  Since I first stepped into a classroom fifty years ago to teach Phantom Lady, I’ve been waiting for someone to write a book about the film’s glamorous producer who also worked with Hitchcock and  DeToth.  That book is finally here, and it’s worthy of the subject.  Smart, detailed, well-researched and incisive about cinema, it tells the story of an unusual woman and defines her cinematic influence." —Jeanine Basinger, Corwin-Fuller Professor of Film Studies at Wesleyan University and Founder of the Wesleyan Cinema Archives

"A solid addition to the growing literature about women filmmakers, with greatest appeal to Hitchcock fans and movie lovers."— Kirkus Reviews Online

"Impeccably researched and is both scholarly and a highly enjoyable read. It stands as a valuable addition to Hitchcock studies…Most crucially, though, Phantom Lady is a study of a woman whose impressive career in 1940s Hollywood has been overlooked up to this point. Through Christina Lane’s book, Joan Harrison’s life and work has now received fitting attention and recognition." — Hitchcock Annual

"This superbly written, absorbing biography of a woman succeeding on her own terms will resonate with fans of Hollywood stories, as well as those who appreciate celebrations of previously unsung women."— Library Journal

“Truly a must-read…Phantom Lady is the reason I read biographies.” —Journeys in Classic Film

Christina Lane is an Edgar®-Award winning author and professor of film studies in the Cinematic Arts Department at the University of Miami. Her books include Feminist Hollywood: From Born in Flames to Point Break, Magnolia, and Phantom Lady. She makes frequent speaking appearances and has provided commentary for such outlets as the Daily Mail, CrimeReads and AirMail, and has been a featured guest speaker at the Film Forum, and on NPR and Turner Classic Movies.
Loading...
or
Not Currently Available for Direct Purchase