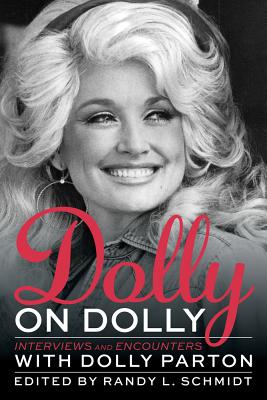 Interviews and Encounters with Dolly Parton (Musicians in Their Own Words)

“Nobody knows Dolly like Dolly,” declares Dolly Parton.
Dolly’s is a rags-to-riches tale like no other. A dirt-poor Smoky Mountain childhood paved the way for the buxom blonde butterfly’s metamorphosis from singer-songwriter to international music superstar. The undisputed “Queen of Country Music,” Dolly has sold more than 100 million records worldwide and has conquered just about every facet of the entertainment industry: music, film, television, publishing, theater, and even theme parks. It has been more than fifty years since Dolly Parton arrived in Nashville with just her guitar and a dream. Her story has been told many times and in many ways, but never like this.
Dolly on Dolly is a collection of interviews spanning five decades of her career and featuring material gathered from celebrated publications including Rolling Stone, Cosmopolitan, Playboy, and Andy Warhol’s Interview magazine. Also included are interviews which have not been previously available in print. Dolly’s feisty and irresistible brand of humor, combined with her playful, pull-up-a-chair-and-stay-awhile delivery, makes for a fascinating and inviting experience in down-home philosophy and storytelling. Much like her patchwork “Coat of Many Colors,” this book harkens back to the legendary entertainer’s roots and traces her evolution, stitching it all together one piece at a time.


Praise For Dolly on Dolly: Interviews and Encounters with Dolly Parton (Musicians in Their Own Words)…

“Dolly on Dolly magnificently encapsulates Dolly Parton’s career through her own words. It’s a must read for fans of all ages.” —Gary and Larry Lane, actors and filmmakers (Hollywood to Dollywood)


"Six decades into her career, Dolly continues to be a fountain of songwriting creativity. Randy L. Schmidt’s Dolly on Dolly reflects all of this. The book chronicles journalists’ encounters with this force of nature over forty-seven years. I was charmed by its very early stories, written when she was just beginning to establish her image. But I was equally enthralled by the stories written about Dolly as I know her today, as an American popular-culture icon. Love her. Love this book.” —Robert K. Oermann, music journalist

"Dolly on Dolly is an indulgent journey through Dolly's life and career, giving fans a chance to relive interviews they haven't seen in decades, but moreover it is a study in excellent interview technique. Dolly Parton is one of the world's most skilled interview subjects, expertly navigating reporters' questions with humor and wit, remaining in control of the interview at all times and gently steering if where she wants it to go. Dolly on Dolly offers a fascinating overview of how her natural interview talent grew over time to a level that few in the public eye can match." —Duane Gordon, publisher, dollymania.net

“This polished tribute will be candy for Parton fans, while readers with a casual interest in pop culture will find it highly browsable and full of good humor.” —Library Journal

"You don’t need to be a Dolly Parton devotee to appreciate these 25 in-depth interviews, spanning 1967 to 2014, which chronicle the journey of a talented woman coming into her own." —BUST magazine

"Dolly on Dolly is a must for the legions of Dolly Parton fans and will prove to be an instant and enduringly popular addition to community library American Biography collections, as well as academic library American Country Music History supplemental studies lists." —Midwest Book Review

Randy L. Schmidt is the author of the acclaimed bestselling biography Little Girl Blue: The Life of Karen Carpenter and the editor of Judy Garland on Judy Garland and Yesterday Once More: The Carpenters Reader. He has also written articles for the Advocate and the Observer. He teaches music in Denton, Texas.
Loading...
or
Not Currently Available for Direct Purchase