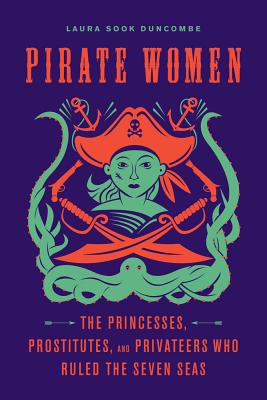 The Princesses, Prostitutes, and Privateers Who Ruled the Seven Seas

In the first-ever Seven Seas history of the world’s female buccaneers, Pirate Women: The Princesses, Prostitutes, and Privateers Who Ruled the Seven Seas tells the story of women, both real and legendary, who through the ages sailed alongside—and sometimes in command of—their male counterparts. These women came from all walks of life but had one thing in common: a desire for freedom. History has largely ignored these female swashbucklers, until now. Here are their stories, from ancient Norse princess Alfhild and warrior Rusla to Sayyida al-Hurra of the Barbary corsairs; from Grace O’Malley, who terrorized shipping operations around the British Isles during the reign of Queen Elizabeth I; to Cheng I Sao, who commanded a fleet of four hundred ships off China in the early nineteenth century.

Author Laura Sook Duncombe also looks beyond the stories to the storytellers and mythmakers. What biases and agendas motivated them? What did they leave out? Pirate Women explores why and how these stories are told and passed down, and how history changes depending on who is recording it. It’s the most comprehensive overview of women pirates in one volume and chock-full of swashbuckling adventures that pull these unique women from the shadows into the spotlight that they deserve.


Praise For Pirate Women: The Princesses, Prostitutes, and Privateers Who Ruled the Seven Seas…

“A satisfying and necessary addition to the piratical pop culture canon.” —Bitch

“Duncombe reveals dozens of fascinating tales, starting with the earliest known female pirate—Queen Artemisia I of Halicarnassus in the 5th century BC.” —New York Post

“Highly readable and interesting . . . Pirate Women is a good introduction to female pirates and the eras in which they lived.” —Pirates and Privateers Website

“Duncombe’s well-researched account will appeal to history and women’s studies aficionados, lovers of myth and lore, and all interested in viewing the past through a new lens.” —Booklist

Laura Sook Duncombe is a lawyer and a writer whose work on women pirates has appeared on Jezebel. Visit her at www.laurasookduncombe.com

2. The author includes several pirates in the book whose stories are known to be untrue. How do these stories compare to some of the more verifiable pirate stories? Are they noticeably different?

3. What might compel a person to create a pirate story? What details would be important to that story?

4. The author notes that many details of these women’s daily lives are lost to time. What are some things that you would most like to know, if one of their diaries was discovered?

5. If you could interview any of these pirates, who would you want to speak to, and why?

6. Many of these women left undesirable situations at home to begin their pirate careers. What modern-day situations might tempt a woman to consider a life at sea?

8. The last chapter of the book deals with pirate film adaptations. Are there any pirates in the book you would particularly like to see on-screen?