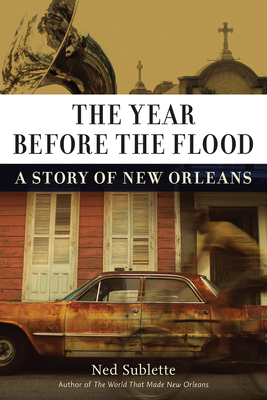 The Year Before the Flood (Paperback)

A Story of New Orleans

Ned Sublette traces an arc of his own experience, from the white supremacy of segregated 1950s Louisiana through the funky year of 2004–2005. By turns irreverent, joyous, darkly comic, passionate, and polemical, he juxtaposes the city’s crowded calendar of parties, festivals, and parades with the murderousness of its poverty and its legacy of racism. With a grand cast of musicians and barkeeps, scholars and thugs, vibrating with the sheer excitement of New Orleans, The Year Before the Flood is an affirmation of the power of the city’s culture and a heartbreaking tale of loss.

Ned Sublette is the author of The World That Made New Orleans: From Spanish Silver to Congo Square, Cuba and Its Music: From the First Drums to the Mambo, and The American Slave Coast: A History of the Slave-Breeding Industry. Cofounder of the record label Qbadisc, he coproduced the public radio program Afropop Worldwide for seven years. A writer, record producer, and musician, he lives in New York City.

Praise For The Year Before the Flood: A Story of New Orleans…

"An intense and thoughtful 'companion volume' to The World that Made New Orleans . . . A powerful, heartfelt and sometimes angry take on a great American city." —Kirkus Reviews

"Ned Sublette is a literary Spirit Master, and The Year Before the Flood is his most personal and astounding work, full of mad knowledge and unorthodox insights about race, crime, history, politics, music and all the other ingredients that flavor the righteous roux that is New Orleans." —T.J. English, author, Havana Nocturne and Paddy Whacked

"Ned Sublette is the rarest of writers. The Year Before The Flood—his third tour de force work on music, race, history, and conscience—is his most personal and memorable yet." —Jeff Chang, author, Can't Stop Won't Stop: A History of the Hip-Hop Generation

"Ned Sublette sees the edgy magic of New Orleans with the eyes of both an insider and outsider. From race to music, from Parasol’s bar to the Mardi Gras Indians, he really gets it. His feel for the sources of jazz and funk flavor the book and make it a delight." —Walter Isaacson, author, Einstein: His Life and Universe

"Sublette is a musical archeologist at heart . . . Part memoir, part history lesson, it's a scrapbook of the bustling port city at its most joyful, boisterous and deadly." —Los Angeles Times

"A musician and musicologist, Sublette writes with passion and precision of New Orleans' music and Mardi Gras, violence and racism, and its unique—and now perhaps permanently damaged—culture." —St. Petersburg Times

"Sublette's first-person narrative captures the Big Easy before Hurricane Katrina struck in 2005, and subtly hints at the surreal dysfunction that would take place immediately afterward." —Time Out New York
or
Not Currently Available for Direct Purchase
Copyright © 2020 American Booksellers Association